Who are the men vying for power in Haiti? 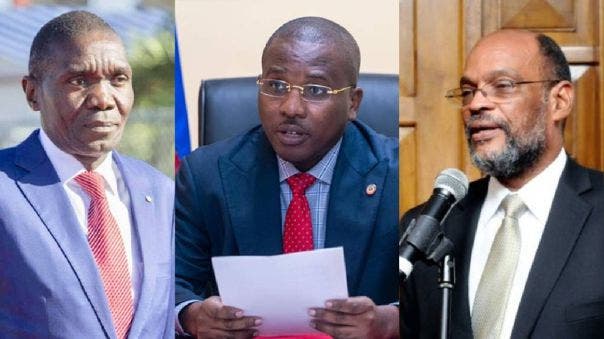 Three politicians dispute the temporary control of Haiti’s power after President Jovenel Moise’s death, shot dead in his residence on July 7. A delegation from the United States met jointly with the three candidates this Sunday to try to mediate between them and “reach a political agreement that allows the country to hold free and fair elections.”

These are some facts to know the three aspirants better to occupy the National Palace- Claude Joseph, Ariel Henry, and Joseph Lambert.

Foreign Minister since March 2020, he assumed the position of interim prime minister since April 2021, after the resignation of Joseph Jouthe, when the political crisis was aggravated by the draft of the new Constitution promoted by Moise and by the increasing violence of armed gangs. On July 5, President Moise relieved him of the post of Prime Minister, appointing Ariel Henry as his replacement.

As agreed, Claude Joseph would continue in the Government as Chancellor. Joseph came to congratulate his designated successor last Tuesday publicly, but hours later, he assumed the reins of power after the assassination since his successor had not been officially invested. His appointment has received the express support of the United States and the United Nations.

The former leader of the student organization Graphneh was very active during the protests that led to the coup of State that toppled the leftist Jean-Bertrand Aristide in 2004. Considered as a member of the wing’s toughest match Tèt Kale (right), as chancellor, had to deal with pressure from Washington by the increasing authoritarian drift of the Moise government since the beginning of last year.

Prime Minister appointed by Moise on July 5, with the mission of forming a consensus government that would integrate figures from allied parties and the moderate opposition, to try to calm political tensions until the elections. He was Minister of the Interior and Labor Portfolios during Michel Martelly’s mandate, although he came from the Inite party (center-left) of former President René Préval.

He was part of the Council of Sages, a body set up in 2004 with US support after the coup State Aristide, to appoint a prime minister. Henry was chosen to be part of that entity, whose existence had no constitutional basis because it is a personality of recognized prestige since he is a respected neurosurgeon, one of the few in Haiti.

He is the current president of the Senate, a chamber that he directs for the second time. Amid the power vacuum opened by the death of Moise, he tries to be sworn in as interim president of Haiti. The appointment has received the support of eight of the ten senators who are still active in a practically inactive chamber due to the lack of a quorum. Lambert has also received the support of minority parties and even some sector of Tèt Kale, the party by Moise.

For decades, Lambert is a veteran politician who has politically controlled his hometown, Jacmel, the most important on the southern coast of the country. He is known in Haiti as “the political animal” for his negotiating skills and his ability to coexist with parties from across the political spectrum, from the left to the extreme right. In the first phase of this legislature, he was an ally of President Moise, but he became one of his most vigorous opponents in the last year.