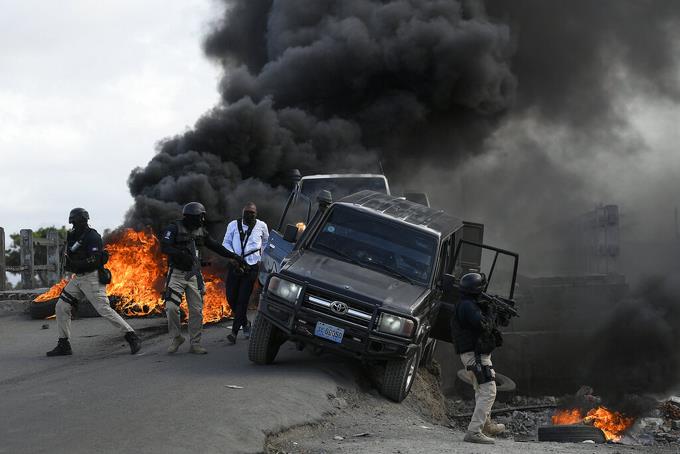 Gunshots were heard, and clouds of tear gas and black smoke spread over people at the funeral.

The body of slain Haitian President Jovenel Moïse returned to his hometown on Friday for a private funeral with heavy security measures following a series of violent protests and fears of political volatility in the Caribbean nation.

His widow, Martine Moïse, arrived amid cries of “Justice, justice!” and went straight to the coffin. He rested his left arm on the coffin with his right arm in a sling and took it to his heart, always silent. Her eyes filled with tears as her three children approached.

Moments later, a group of supporters snatched a large portrait of Moïse and paraded with him as a police band played the national anthem, and sobs were heard.

As the ceremony began, hundreds of protesters clashed with police in front of the private residence. Gunshots were heard, and clouds of tear gas and black smoke spread over people at the funeral. Protesters’ cries drowned out priests’ speeches.

Previously, cries of “murderer!” were heard when National Police Chief Léon Charles arrived. Then, Haitians in dark clothing and black and white formal dresses shouted and pointed their fingers at the grandstands occupied by Haitian officials and foreign dignitaries.

A supporter of Moïse threatened Charles: “Go now or we’ll grab you after the funeral!”

Brand-new Prime Minister Ariel Henry was greeted with chants of “Justice for Jovenel!”

White T-shirts and caps with his image were distributed to his supporters on the eve of what is supposed to be the last honors for Moïse, who was shot dead during an attack on his private home on July 7. His wife was seriously injured.

Moïse’s body arrived shortly after dawn at his family’s seaside estate, where the funeral will be held. Six officials carried the coffin to a stage, made the go-ahead, and remained silent for several minutes before covering it with a prominent reddish Haitian flag.

The funeral comes days after a new prime minister, backed by key international diplomats, took over the country, a move aimed at averting a power struggle following Moïse’s assassination.

Ariel Henry, who had been appointed prime minister by Moïse before his assassination but was never sworn in, replaced interim prime minister Claude Joseph and has pledged to form a consensus interim government until elections are held.

On Thursday, violent protests rocked neighborhoods in Cape Haitiano as groups of men fired shots into the air and blocked some roads with burning tires. A convoy heavily guarded by police carrying unidentified officers nearly capsized after crossing one of the barricades.

Moïse assumed Haiti’s presidency in February 2017 and, in recent years, has come under increasing criticism from those who accused him of being increasingly authoritarian. He had been in government by decree for more than a year after the country failed to hold legislative elections.