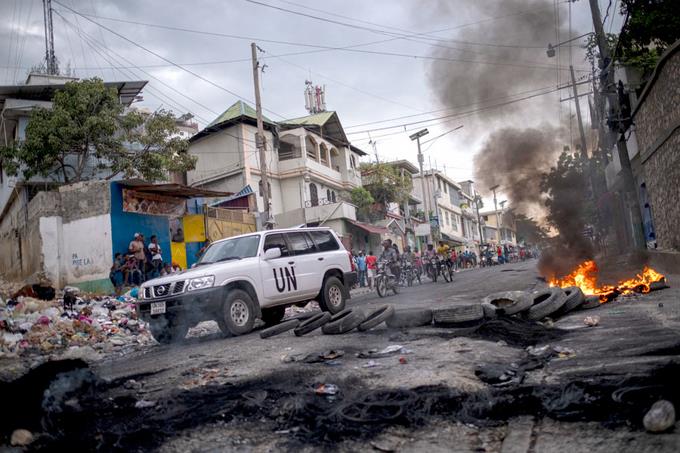 Haiti, now with almost half of its territory dominated by criminal gangs, continues to be trapped in an infinite spiral of social and political conflicts that pushes it towards a state of irreparable collapse. / AFP

As gangs take over Haiti, more movement, surveillance, and increased intelligence management at the border.

Former Haitian Minister of Finance, Daniel Dorsainvil, has frankly confessed the hard truth about the dark fate of his country: “Haiti has sunk” while assuring that the daily life of his compatriots “is composed of fear, anxiety, uncertainty and bad life.”

Meanwhile, the Dominican-Haitian border is experiencing a lot of movement, increased surveillance, operations, and more intelligence management, which has triggered the workload on thousands of soldiers deployed there to guarantee the integrity of the national territory.

“There is no longer any doubt.”
The former Haitian Finance Minister assures that “this situation continues to worsen to such an extent that there is no longer any doubt that Haiti is sinking. Rather, it should be noted: Haiti has sunk”. Dorsainvil, an economist who held the Economy portfolio during 2006-2009, frankly un-knotted the harsh reality plaguing his country.

He said it openly to the Haitian newspaper Le Nouvelliste, with an opening reflection. He states that a fundamental cause of the political and social crises his country is going through “comes from the fact that the irresponsible State is not relevant in the daily life of citizens.”

Even with these precisions of Haiti’s existential debacle, Dorsainvil believes it is essential to restore the credibility of the State, “requiring it to make a positive presence in the daily lives of its constituents…” Haiti “at the end of the line” “The Haitian people have reached the end of the line; they are losing strength, especially, but not exclusively, the most vulnerable people,” he said.

And he adds that means must be found in the Haitian tax system to help them. This package of measures, which will lead to a higher tax burden, implies an increase in the price of petroleum products at the pump.

DR remains vigilant
The irremediable collapse of Haiti, now with almost half of the country under the control of criminal gangs, has repercussions and concerns on the eastern side of the Dominican Republic.

For this reason, the Dominican-Haitian border is seeing a lot of movement, increased surveillance and operations, more intelligence management, and an increased workload on the thousands of soldiers deployed there to guarantee the integrity of the national territory.

Military sources have commented that in addition to the traditional illegal Haitian migratory pressure that has always burdened the country with work and enormous expenses to sustain the border security devices, there is now the threat of the gangs that dominate large territories in Haiti.

All this means more expenditure of the flaccid resources budgeted for investment in domestic security and a more significant workload for the personnel of the Specialized Border Security Corps, the G-2 military intelligence group, and the Army soldiers stationed along the border cordon.

At least, this is implied by the new ingredient being added by the phenomenon of Haitian gangs, already so powerful that they have taken over entire regions and neighborhoods in that country.

Now lets build a huge wall around that hellhole and let it burn.

bro chill , people look at us crazy when you say shit like that.
borderwall is not a bad idea 23kilometors all ready being built ! but be more humane ,
we are talking about people
who are extremely poor with absolutely nuthing and here you are eating doritos and yogurt
saying let them all burn, theres people from all over the globe who visit our country and this comment
believe or not reflects on who we are as a people , iam with You on building a wall because we need it so sad to say we do! But i dont agree with letting them all burn i think is very inhumane