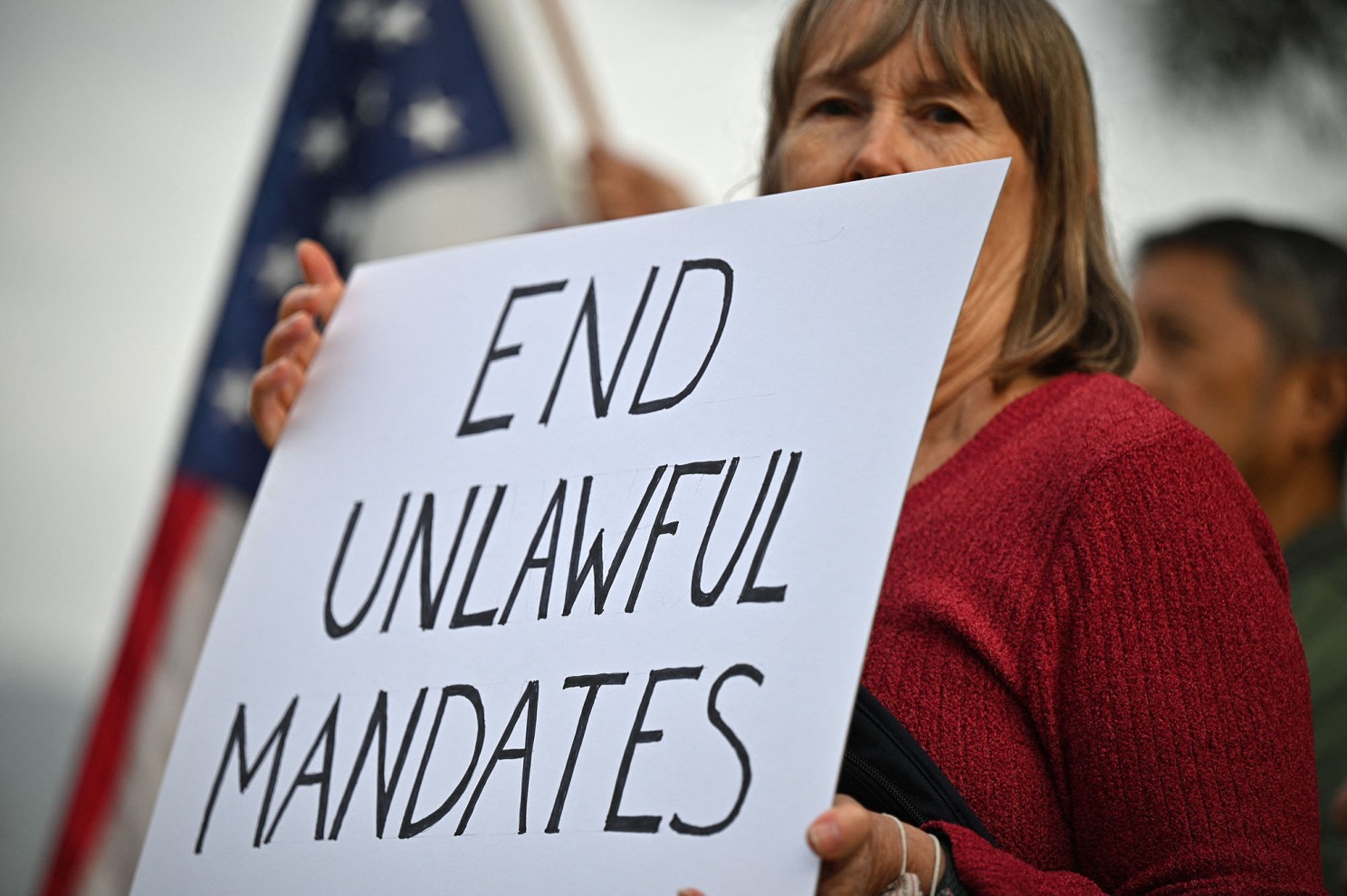 The vaccine mandate prompted legal challenges from over two dozen state attorneys general, as well as from religious and business groups. Robyn Beck/AFP via Getty Images

The Occupational Safety and Health Administration has suspended enforcement of the Biden administration’s sweeping COVID-19 vaccine mandate for large companies after a federal appeals court upheld a decision to pause it last week.

“While OSHA remains confident in its authority to protect workers in emergencies, OSHA has suspended activities related to the implementation and enforcement of the ETS [Emergency Temporary Standard] pending future developments in the litigation,” OSHA said in a statement on its website.

Biden announced the mandate in September and asked OSHA to draft up workplace rules that implement the order, which would mandate that every company with 100 or more employees either require they get the COVID-19 vaccine or get tested weekly and wear face masks.

According to the OSHA rules, companies that failed to comply would face a $14,000 fine for every infraction, which was set to take effect on Jan. 4 before the courts got involved.

Last week, a three-member panel of the 5th US Circuit Court of Appeals in New Orleans cited “grave statutory and constitutional” concerns in upholding the stay on implementation of the mandate.

The appeals court initially issued an emergency stay on enforcement of the rules on Nov. 6 before affirming that decision last week.

In September, President Biden announced the vaccine mandate and asked OSHA to draft up workplace rules that implement the order.

The requirement, which would affect over 84 million workers, prompted legal challenges from over two dozen state attorneys general, as well as from religious and business groups, who argue it is unconstitutional.
While Republican politicians have vocally opposed the mandate, even some Democrats, such as Kansas Gov. Laura Kelly, have objected to Biden’s directive.

The Biden administration has argued the mandate is necessary to end the pandemic and reopen the economy and that halting its implementation could lead to dozens or even hundreds of deaths.

“OSHA has suspended activities related to the implementation and enforcement of the ETS [Emergency Temporary Standard],” the organization announced in a statement about the mandate.

OSHA
“The mandate is a one-size-fits-all sledgehammer that makes hardly any attempt to account for differences in workplaces (and workers),” Circuit Judge Kurt Engelhardt wrote for the panel in its opinion.

“The public interest is also served by maintaining our constitutional structure and maintaining the liberty of individuals to make intensely personal decisions according to their own convictions – even, or perhaps particularly, when those decisions frustrate government officials,” Engelhardt wrote in the decision.

Despite the legal challenge, the Biden administration has asked companies to voluntarily enforce a vaccine mandate, arguing that it will ultimately save them money and help operations.

The Biden administration has argued that halting the vaccine mandate could lead to dozens or even hundreds of deaths.

“We think people should not wait. We say do not wait to take actions that will keep your workplace safe. It is important and critical to do and waiting to get more people vaccinated will lead to more outbreaks and sickness,” White House deputy press secretary Karine Jean-Pierre said last week at a White House press briefing.

“This is about keeping people in the workplace safe. And so what we’re seeing is more businesses and school closures and more lost jobs that keep us stuck in a pandemic that we’re trying to end.”

She added: “We’re trying to get past this pandemic and we know a way to do that is to get people vaccinated. So people should not wait. They should continue to go move forward and make sure that they’re getting their workplace vaccinated.”

What will the clapping seal Dominican politicos do now?

Will DR who always copies what the US does learn from this? Let’s wait and see. Thank God in the US we will have a glimmer of hope for justice but in DR it’s too small and corrupt. I’m betting the illegal mandate only gets lifted after most of these poor bastards took the jab. Even then they won’t admit they were wrong, they’ll say we reached 70 percent. Yaah! Then back to lock downs this winter after they realize the dam thing doesn’t work.