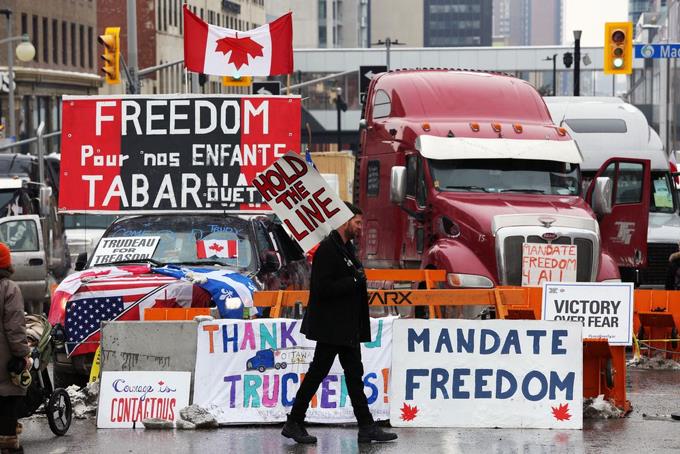 Protesters against sanitary measures in Canada have become the new heroes of conservatives and opponents of restrictions in several countries, who take Canadian truckers as a source of inspiration.

In New York, hundreds of municipal employees demonstrated on Monday against the decision to fire from Friday those who refuse to be vaccinated against covid-19. They denounce “medical tyranny and compulsory vaccination” with a large Canadian flag.

A hundred truck drivers demonstrated in Alaska against mandatory vaccination in support of their Canadian colleagues the day before.

The “Freedom Convoy,” launched at the end of January by Canadian truck drivers against the obligation to be vaccinated to cross the border with the United States, quickly turned into a protest against the sanitary measures in Canada as a whole and, for some protesters, against the government of Justin Trudeau.

Hundreds of trucks have been blocking the center of the Canadian capital, Ottawa, for more than a week, where the mayor has declared a state of emergency to deal with the blockade.

The mobilization has received the support of high-ranking American conservatives, from Texas Senator Ted Cruz, who describes them as “heroes” and “patriots” to former President Donald Trump, including millionaire Elon Musk.

And there are calls to extend the mobilization to the US capital.

“The Freedom Convoy could come to Washington with American truckers who want to protest Joe Biden’s ridiculous policy on covid-19,” Trump said.

The wave of protests has spread worldwide, fueled by populist currents that denounce the obstacles to freedom imposed by the elites in power.

“Very inspiring”In France, a Facebook page, also called “Freedom Convoy” and followed by more than 275,000 people, calls on opponents of the very restrictive health measures imposed by the government to gather in Paris on Sunday to besiege the capital.

Unlike Canada, this mobilization does not come from truckers.

The movement is in line with the “yellow vests,” which denounced the precariousness and high cost of living before the pandemic.

It’s objective: to protest against the policy of President Emmanuel Macron by occupying public roads. But instead, he was revived by anti-vaccines and critics of how the crisis was handled.

On Facebook, he denounces “the restrictions” and “the health passport,” but also “the increase in the price of energy, the cost of living and the decline in (the age) of retirement,” claims, the latter, which recall to those of the “yellow vests.”

Monde insists that the mobilization is “apolitical” by criticism against political leaders, especially from the extreme right, who try to take advantage of the movement.

Other groups on social media have also called for mobilization in Brussels, the seat of the European Union.

On Tuesday, the movement has reached New Zealand, where a convoy of trucks and caravans blocked the Parliament neighborhood in the capital, Wellington, to protest against current health measures, which are among the most draconian in the world.

Hundreds of vehicles, with messages such as “give us back our freedom” and “coercion is not consent,” parked in the streets near Parliament. Several protesters carried Canadian flags in support of the Ottawa truckers.

According to Stu Main, a Wellington resident, the protesters feel that the government is not listening to their concerns.

Jacinda Ardern, Prime Minister, says that most New Zealanders supported the government’s vaccination program and compulsory vaccination for certain professions and entry into force of a sanitary passport.

It is clear it was never about your health, people realize that it’s a power grab.
Now it’s not fighting the pandemic to protect people, it’s a fight on people to protect the pandemic