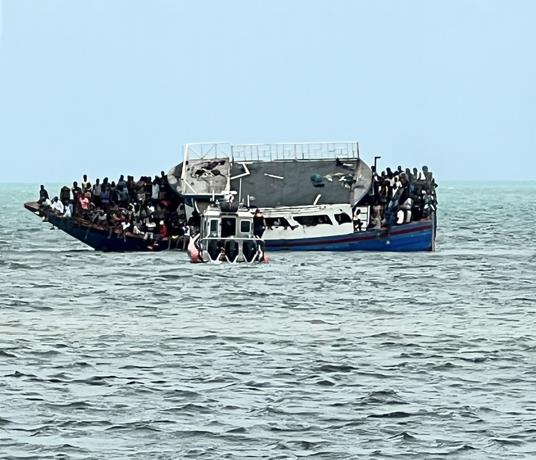 Photo taken from the Twitter account of Walter Slosar, head of the Miami Sector of the US Border Patrol.

The boat that ran aground was “in poor condition” and overloaded with migrants without life jackets.

More than 300 Haitians, twice as many as initially reported, arrived on Sunday aboard a precarious boat to the coast of Key Largo in southern Florida and are in the custody of the authorities, according to an official from the agency. United States border control and protection.

Walter Slosar, chief of the US Border Patrol’s Miami Sector, many of them required medical attention, said on Twitter.

Local media reported that about 160 of those on the boat jumped overboard and swam to shore.

There were minors and women among those who traveled in the fragile and crowded boat, as shown by the images of local television stations.

According to Adam Hoffner, CPB division chief, the boat was “in poor condition, not to mention overloaded by migrants, with no life jackets or anything like that on board.”

Those who did not jump overboard are still in the custody of the Coast Guard’s seventh district on Monday; a spokesman told Efe.

The location of the incident, where the boat tipped over, was near the Ocean Reef Club, a select gated community in Cayo Largo, not far from where another boat was intercepted by US authorities in January carrying 176 Haitians on board.

The incident occurred a day after the United States Coast Guard intercepted a “Haitian sailboat” in Anguilla Cay, an islet belonging to the Bahamas, with 127 people on board.

“Increased patrols are stopping these unsafe voyages before lives are lost at sea,” the US Coast Guard said.

Why do you Dominicans have such hatred for Haitian people?! It is disgusting!! They’re human beings just like you! Stop treating them like peasants. It infuriates me to see how well you treat Venezuelans who migrate to your country but yet you can’t treat Haitians with the same respect.

This news article has nothing to do with the Dominican Republic, but this guy has the nerve to say that Dominican hate and mistreat Haitians ? I just don’t get it . I really for sure Dominican really want to left alone and not be bothered by people like you . And for the matter we treat Venezuelans better because they come legally but not just that for god sake they speak the same language as Dominican, where in the world else they speak Haitian Creole????? only in Haiti , communication is very important if two different country want to get along!!! I am thinking this guy is another Barbecue in disguise , defend from afar and never went back . Just leave Dominican alone , ok .

🤔 I think you need to use grammar check.

I for sure you understood that small comment of mine. It’s hard to type on cellular with big fingers.

Aly the grammar teacher on the internet lol funny people you will find all over the internet, thanks for laughs, you should correct me on my comment ; about the new article has nothing to with Dominicans but you should help out the Haitian trying to flee their side of island.

Trust me i could not care less about this, on the contrary, i hope they all find their way to a better life in north america and Europe

About the Venezuelans, they (!”MOSTLY”!) come here with a VISA, yeah i know its crazy. Try not to get lost with it.