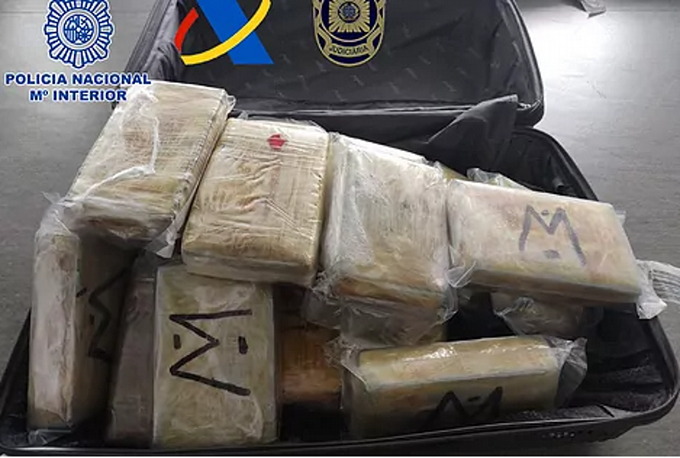 Photo of the drugs seized during the operation / Taken from elmundo.es.

Madrid
An operation between Spain and Portugal has led to the arrest of fifteen people, including an accused drug trafficker known as “the dreaded Calin,” as he tried to flee to the Dominican Republic, Spanish police said Saturday.

Police explained in a statement that an organization accused of smuggling cocaine into Spain was dismantled, allegedly led by Carlos Julio Matos Montero, “the fearsome Calin,” who has a lengthy criminal record and was about to flee Portugal to the Dominican Republic, his native country.

This man had been under investigation by the Spanish Police since 2019 as allegedly responsible for the introduction into Spain of forty kilos of cocaine through Madrid airport. He was arrested when he was about to take a flight from Lisbon.

Among other priors, Matos Montero was arrested in 2014 in the Dominican Republic for the death of Oscar González Matos. He had arrived in that country deported in 2003 after serving a year in prison in the United States; in 2009, he was charged with two murders and in 2011 with another.

The police operation culminated in numerous searches in several Spanish cities, in which 83 kilos of cocaine, 28 telephone terminals, a revolver, seven vehicles, two scales, and multiple documents, among other items, were seized.

The investigation began in April 2021 when the agents learned that a man of Dominican origin was allegedly responsible for transferring a woman to the Spanish island of Lanzarote (Atlantic) with sixty balls of cocaine, for which she was arrested at Madrid airport.

The agents found out that it was “the dreaded Calin” and subsequently detected that the alleged recipient of the drug and leader of the organization fled to Portugal when he became aware of the arrests of other alleged members of the gang, so a European arrest warrant was issued. He was arrested by the Portuguese police when he tried to flee to his country of origin.

The investigation suggested that those investigated could be the owners of a suitcase seized at Lisbon airport in October 2021 with thirty kilos of cocaine and two others in January 2022 with another fifty kilos, until they made several arrests, including a woman who used false documentation from Belgium to hide a warrant for her arrest for drug trafficking, according to the police.