Haiti collapses between violence and violation of human rights 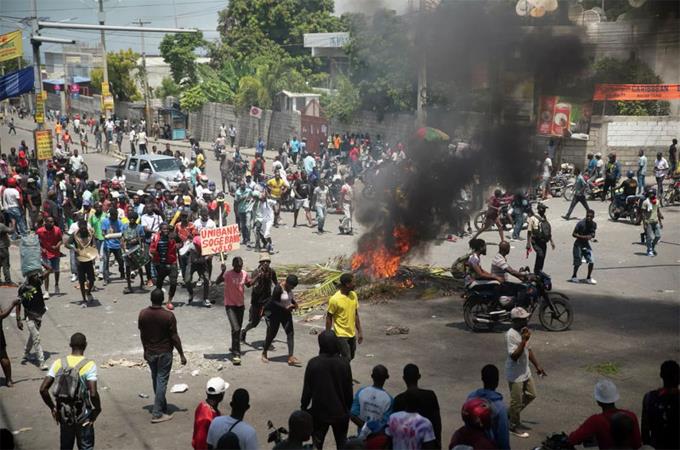 Hundreds of Haitians yesterday continued the protests in different locations of that troubled country, in repudiation of the rise in fuel prices.

Santo Domingo, DR
Crisis, protests, violence, and massive violation of fundamental rights, form a sequence of manifest events in the daily life of Haitians punctually collected in the records of human rights watchdogs on a global scale.

As of this month, the documented figures of human rights violations in Haiti are impressive, painting a terrifying picture of the human pain that oppresses these people.

The blame is shared between the government, politicians, and criminal gangs that control large parts of the country.

In recent months, the wave of gang violence has killed hundreds of people, deepening the country’s political and human rights crisis, according to Human Rights Watch.

According to a United Nations report, gangs have kidnapped and killed hundreds of people in the capital Port-au-Prince since early July.

According to the UN Office in Haiti, 540 people were kidnapped and more than 780 killed between January and May.

And in the last five months of 2021, 396 people were kidnapped and 668 killed.
In the first week of last July, an alliance of dangerous gangs attacked the Nan Brooklyn neighborhood in Cité Soleil, Port-au-Prince, killing at least 300 people, 21 of them burned to death. According to the National Network for the Defense of Human Rights, many are missing a local human rights organization.

Gangs have set fire to and demolished houses. On July 10, the “5 Seconds” gang took over the Palace of Justice in Port-au-Prince and forced judicial officials to leave the place, carrying computer equipment, desks, and other goods, according to the head of the National Association of Judicial Secretaries of Haiti.

Thousands of detained Haitians could not see a judge, and their cases remain unreviewed due to the lack of hearings at the Palace of Justice and other courts in Haiti.

Government burdens
The government bears a lot of blame. The Office of the United Nations High Commissioner for Human Rights says there shows “a pattern of violations and abuses” of fundamental guarantees “followed by a lack of accountability.”

She has also said she is concerned “about Haiti’s persistent insecurity, poverty, structural inequalities, and rising political tensions.

Kidnappings for ransom, attacks by criminal gangs against allegedly rival neighborhoods, and widespread insecurity have increased in Haiti in a context of almost total impunity.

Ongoing violence
In Haiti, all avenues to find a way out of the crisis seem to be closed.
Violence and protests began early yesterday and continued all day, so the Spanish embassy was forced to order the closure of its mission, starting today, and the suspension of services to the public.

The situation is becoming very dangerous in the streets, and there is much fear in the productive sectors, mainly industrial and small and medium commerce.

Early yesterday, demonstrators attacked with stones the residence of André Michel, self-proclaimed “people’s lawyer” in Thomassin 37, on the heights of Pétion-Ville, according to a report by Haiti 24 News.

They also set fire to a car in the courtyard of Michel’s house, and those responsible accused him of “abandoning” the popular struggle since the coming to power of Ariel Henry.

The embassy of the Iberian nation explains that “due to the protest movements currently taking place in Port-au-Prince, the embassy will keep its doors closed this Wednesday, September 14,” writes the diplomatic headquarters in a statement published on its Twitter account.

In making this decision, the legation of the European country expressed its apology to the public for these inconveniences. In this regard, it indicates that its emergency telephone number remains “available for Spanish residents in the country.”

The closure of the Spanish embassy in Haiti has been joined by other diplomatic institutions that have been forced to take similar measures in view of the seriousness of the Haitian situation.

Last Tuesday, the French embassy announced, through its head, Fabrice Mauriès, the closure of its functions “until further notice.”

On the other hand, Haitian media reported that the public and private institutions of Miragoâne, a commune of more than 62,000 inhabitants located in the district of the same name, in the department of Nippes, closed their doors, in support of the strike, as a protest against the measures of readjustment of fuel prices ordered by the government.

Data
Opening the day.
No sooner had the sky brightened up yesterday, as the new day dawned over the crowded Haitian urban and rural conglomerate, than political and social unrest once again took over the lives of the people in that unfortunate country, with a new day of protest against the adjustment of the prices of petroleum derivatives in Port-au-Prince and other cities. The portal Haiti24.Net reports early in the morning of barricades in several streets of the capital, creating difficulties in traffic management again.

Nothing on the US media yet.