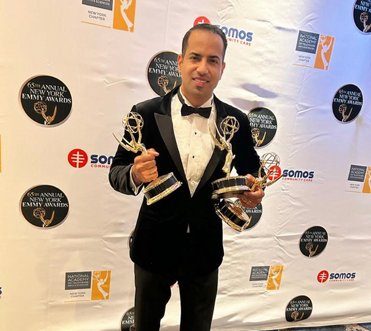 At the 65th Emmy Awards ceremony in New York City, journalists from the Dominican Republic Eliecer Marte, Darling Burdiez, Gary Merson, and Esperanza Ceballos were recognized with honors. Marte won three awards in separate categories, but he also won a group prize for the best morning newscast for its coverage of a blizzard. He got four awards in all. The journalist of Dominican descent who currently works for the Telemundo network at its station in New York City received three statuettes for his work on that network during the ceremony.

Marte received an award for an investigation in which he addressed the harsh reality faced by many immigrants who, due to the high cost of rent in NYC, live in illegal basements. Marte illustrated how some residents of these spaces drowned after the remnants of Hurricane Ida. The presenter was also recognized for a special report on the first anniversary of the coronavirus pandemic and the damage that this disease caused within society on a psychological and emotional level. A series about the struggle, evolution, and achievements of the LGBTQ community in the last 5 decades resulted in another victory for Marte.

Eliecer Marte has now won a prize for the reports that he delivers during Telemundo newscasts for two years running. The bilingual journalist won four statuettes in four distinct individual categories the previous year. Since Marte occasionally contributes to the Anglo-Saxon network, NBC, he has advanced professionally in addition to acting as a stand-in newscaster.

Journalists for the Univisión network Gary Merson and Esperanza Ceballo won two and one awards, respectively.