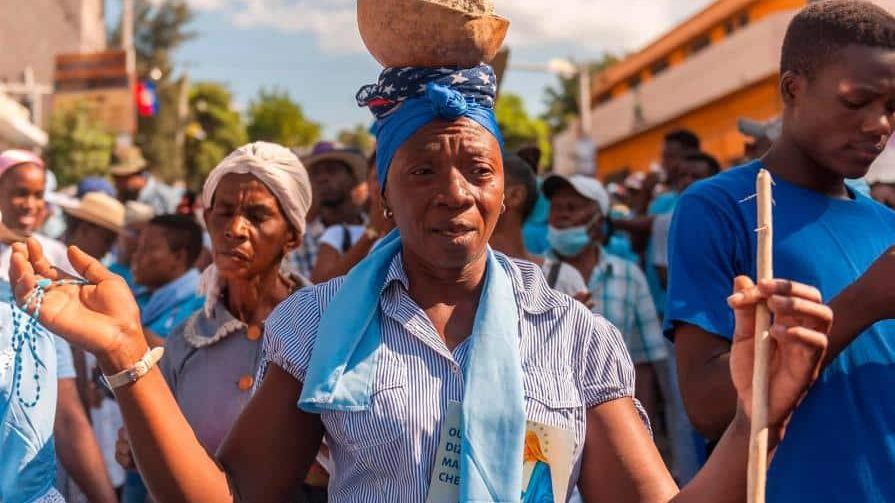 Thousands of faithful Catholics marched through the streets of various Haitian cities, including Port-au-Prince, this Thursday in the traditional veneration of the Virgin of the Immaculate Conception amid an acute humanitarian crisis exacerbated by the country’s insecurity. “Liberation,” chanted the faithful, many of whom wore t-shirts bearing the image of the Virgin, remembering that the children of Mary never lose the battle.

The march lasted several hours in a capital that is struggling to stay afloat in a country that offers no guarantees. Along the route, there were banners with blue and red flags calling for the establishment of peace. “We want to live in peace, free of kidnappings,” one of the banners read. Many of those who attended worship were dressed in blue. Music and chants referring to the Virgin Mary were heard throughout the procession. “Jesus, forgive them because they don’t know what they’re doing,” Catholics cried out, and several people thanked the Virgin Mary for hearing their prayers.

Prayers and songs punctuated the route of this traditional march, which took place in an environment of precarious security. Every December 8, faithful Catholics in Haiti celebrate the feast of the Immaculate Conception in various cities. The march has referred to the country’s crisis throughout the last four years, with demands on banners and political comments. Haiti is in the grip of a severe economic, social, and humanitarian crisis, exacerbated by the actions of armed gangs that control large swaths of territory in Port-au-Prince and other parts of the country at will.