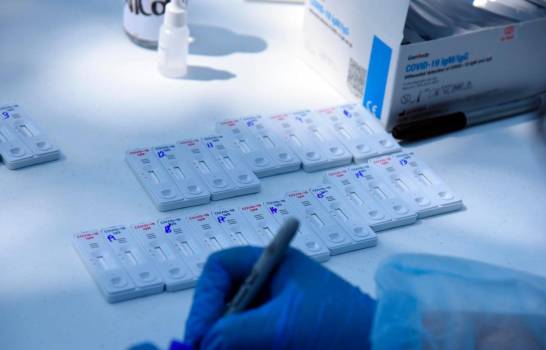 About 26 people were discharged after fighting the virus.

The Minister of Public Health, Rafael Sánchez Cárdenas announced on Monday that 26 people received a medical discharge after being infected with coronavirus for a total of 705 patients who overcame the disease in the last hours.

Sánchez Cárdenas gave such data during epidemiological bulletin No. 88 in which he also revealed that 704 patients admitted for COVID-19 and a hospital occupation of 46% were counted.

Elderly defeat the coronavirus in Santiago

An elderly couple overcame the coronavirus in Santiago, after being admitted to the Unión Médica del Norte clinic.

The couple, whose names were not disclosed, are 83 and 84 years old, respectively.

According to the information provided by the health personnel of the aforementioned clinic, the couple called on citizens to take precautions against the disease.

The Minister of Public Health, Rafael Sánchez Cárdenas, revealed that in the next few days a team will arrive in the country that will automate the extraction of the tests that are carried out at the National Laboratory to diagnose COVID-19.

Sánchez, in an interview in El Informe with Alicia Ortega, explained that the team has already been tendered and that they are waiting for it. She added that the delay is also due to the fact that, first, a piece of equipment arrived that did not match the one installed in the National Laboratory.

Scientists at Imperial College London will begin immunizing people in Britain this week with their experimental coronavirus vaccine, the latest to enter the race to find an effective drug to curb the pandemic.

According to a British government statement, 300 healthy people will receive two doses of the center-developed COVID-19 vaccine, which has received 41 million pounds ($ 51 million) from government funds.

At the moment, the vaccine developed by Imperial College London has been tested only in animals and in the laboratory, where it produced much higher levels of antibodies than usual in infected people.

German authorities unveiled a mobile app on Tuesday that will allow users to track contacts with confirmed coronavirus cases and obtain risk-based recommendations, completely anonymously and for voluntary use.

The application notifies users if for 15 minutes or more they have been within three meters of someone who later, in the 14 days after contact, tested positive for COVID-19; To do this, it uses Bluetooth instead of geolocation technologies.

Based on these factors, ‘Corona-Warn’ (something like ‘Corona Alert’) calculates the user’s risk of infection through an algorithm and advises what protection measures to take. For example, isolating yourself at home and requesting a COVID-19 test.

The Music Festival, the cultural event that the government of France sponsors annually through the French Alliances in Latin America and the Caribbean, will not be postponed due to the effects of the coronavirus.

This is established in the statement sent to Diario Libre in which it is indicated that the day corresponding to this year will be held through social media platforms next Sunday 21 of this month.

Milton Orozco, press attaché of the French embassy in the country, explained that for this opportunity the call will bring together more than sixty artist artists from 22 countries, including ten French in a symphony of videos that they will project from their confinement.