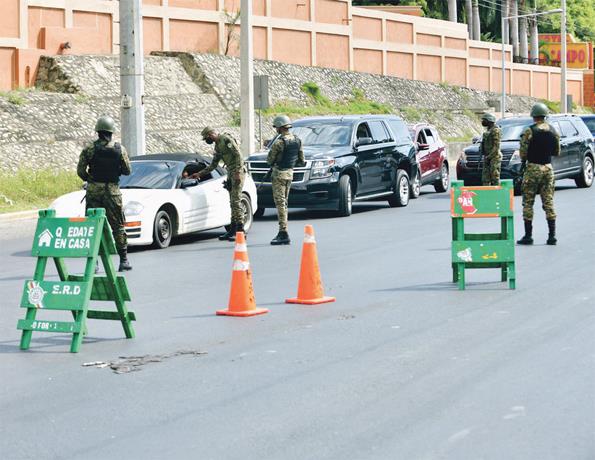 To prevent the massive circulation of citizens and stop the spread of Covid-19, the checkpoints became the most effective form set up by the police and the military. LD FILE

On March 1, 2020, the Ministry of Public Health officially confirmed what was already an open secret, the arrival of the Covid-19 coronavirus, confirming that the Italian tourist Claudio Pasqualini became the first person with the disease in the country.

Immediately, the alarms of the authorities were activated. Before the end of that month, special measures were announced to prevent the pandemic’s impact from being too strong. Since then, two states of emergency, nine extensions of the state of emergency, and 20 separate decrees imposing curfews have been the primary support of the provisions of the Executive Branch to curb the onslaught of the pandemic.

From March to March

On March 14 of the previous year, then-President Danilo Medina announced that the country would implement serious measures to prevent the coronavirus outbreak starting on Monday, March 16.

Among the measures were the closing of borders, the prohibition of flights, and the cancellation of public activities.
These measures would be supported by the first declaration of a state of emergency, which would take place four days after the extraordinary municipal elections. On the 19th of that month, Medina would enact the State of Emergency for 25 days.

Up to that time, Public Health authorities had reported two fatalities, 34 infected, 61 people in isolation, 55 tests pending results, 278 follow-up cases due to contact with infected people, and 54 tests negative for the virus.

One day later, the first curfew since 1998 was issued, when the country was facing the consequences of Hurricane Georges. This first curfew prohibited the transit and movement of people from 8:00 at night until 6:00 in the morning between March 20 and April 3.
This declaration of State of Emergency was extended for 17 days on April 14. During this period, the Dominican population began to violate the confinement and returned little by little to the streets and to use the little public transportation that, despite the prohibition, was circulating in the main roads of the country.

The curfew of that extension was in effect from 5:00 pm to 6:00 am throughout the national territory.
The second extension was enacted again for 17 days, even though the Executive Power requested 25 days. This extension lasted until May 17, with the same restrictive schedules.

During those 17 days, the Central Electoral Board (JCE) decided to suspend and move the presidential and legislative elections, which were supposed to be held precisely on that Sunday, May 17.

On May 12, President Medina requested a third extension of the State of Emergency, for 25 days again to prepare for the “reopening” of the economy, this time the National Congress approved only 12 days to extend the State of Emergency because the rate had dropped from 3 to 1.6 or 1.8 new infections for each infected person and that the rate had fallen from 3 to 1.6 to 1.8.

The approval took place after an agreement among the legislators since there was a deadlock in the possible support due to the refusal of the opposition deputies to extend the state of emergency.

The subway, the cable car, and Omsa and the hairdressing salons and salons began to operate with social distancing and with the use of masks inside each of these facilities.

A fifth extension of the state of emergency was achieved for 17 days and ended five days before the presidential and legislative elections of July 5. It was the product of a negotiation called 30 for 17, which involved the opposition Reformist Party’s deputies.

Although they did not have a majority in that chamber, the PLD legislators managed to convince several PRSC colleagues to vote for the bill, which would free 30% of the accumulated income of each worker in the Pension Fund Administrators (AFP).
While deputies of the Modern Revolutionary Party (PRM) and the People’s Force, who maintained their rejection to the extension of the state of emergency, pointed out two colleagues as the main responsible for what happened, Pedro Botello and Máximo Castro Silverio, spokesman of the PRSC.

After 20 days without these extraordinary measures and 15 days after Luis Abinader won the elections, Medina promulgated the second declaration of the state of emergency for 45 days, citing that it was agreed with the president-elect.

Abinader extended this state of emergency for another 45 days because it was necessary to maintain it to combat Covid-19. This was the first of four extensions he has issued to date.

After the Christmas Eve and Christmas festivities, an “exponential increase” in the spread of the disease nationwide was reported, which led the Health Cabinet, headed by Vice President Raquel Peña, to tighten the restrictive curfew measures. During the first days of 2021, the curfew was from 5:00 pm to 5:00 am, with two hours of free transit, and on weekends from noon to 5:00 am.

Taking the foot off the accelerator

After several complaints and denunciations by the population, the government began to loosen the measures as of January 27, putting the curfew from Monday to Friday from 7:00 pm to 5:00 am and Saturdays and Sundays 5:00 pm to 5:00 am. The people have a grace of free transit.

People have a free transit grace of three hours, so from Monday to Friday, they can circulate until 10:00 pm and on Saturdays and Sundays until 8:00 pm, only to go to their homes.