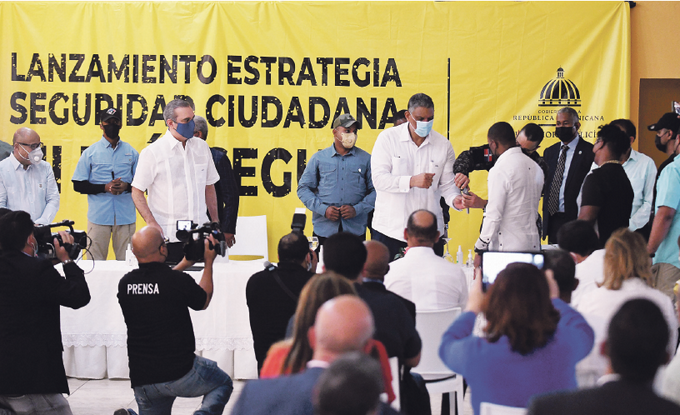 President Luis Abinader and the Minister of the Interior, Jesús Vásquez led the act that left the plan in motion. / JA MALDONADO

The voluntary surrender of firearms, the identification and registration of motorcyclists, as well as street lighting and repair of sidewalks and curbs, are the main points of the Integral Citizen Security Strategy “My Safe Country,” launched yesterday by President Luis Abinader in the populous Cristo Rey sector of the National District.

“We have been working for months on this promised citizen security plan, which begins today as a pilot plan… pilot means that some mistakes will possibly be made, but that we are going to correct it and we are going to continue until it is a success,” said Abinader.

The plan’s details were offered by the Minister of Interior and Police, Jesus Vasquez, who described how the process would work.

Disarmament and registration
In the first instance, the minister revealed that to contribute to the collection and voluntary surrender of illegal weapons, three collection centers were installed in Cristo Rey located at the Tropico Foundation, on Jose Ortega y Gasset Avenue; the Los Cachorros club on Nicolas de Ovando and the Christian ministry Vidas Transformadas, on Higüey Street.

“It is the moment to take illegal weapons out of the streets that are in the hands of unconscionable people, so it is necessary to reduce to a minimum the disastrous numbers that firearms cause mourning and pain in the Dominican family,” said Vasquez.

In this sense, he indicated that as a way of guaranteeing that these recovered weapons do not return to the streets, they would be destroyed in the presence of representatives of the Organization of American States (OAS).

“Every day we see with astonishment the statistics of dead, wounded and other injured, as a result of incidents and problems of coexistence in the neighborhoods and communities of the Dominican Republic,” expressed the minister, who also reiterated that Cristo Rey presents one of the highest indexes of violence.

Regarding the second point, the registration of motorcycles, the minister only made a passing mention without offering any new details about the process.

Previously, the authorities had already announced that to facilitate this task; motorcyclists were classified into four groups according to the use of their vehicles.

The first group corresponds to the motoconchistas, the second to deliveries, the third to those who use the motorbike as a means of personal transportation, and the fourth to messengers and collectors.

However, President Luis Abinader also clarified yesterday that this plan not only revolves around the disarmament of the population but will also address the registration of motorcycles. This task will be under the National Institute of Transit and Land Transportation (Intrant).

On this aspect, Abinader also highlighted the operation’s importance, qualifying it with the same level of importance as the disarmament initiative.

Repairs and training
Concerning the other integral actions by the Central Government, the minister informed that there would also be house repairs, recovery of public spaces, technical training of young people, street lighting, and the renovation of the Cristo Rey gullies.

He indicated that each of these actions “are part of a series of actions that will be developed in the pilot plan Mi País Seguro.”

Likewise, he said that within the plan, the arrangement of the four barracks of the sector and the training of young university students as auxiliary police trained in self-defense, swimming and communication are proposed. They also intend to bring specialists to give talks and conferences on peaceful coexistence to the residents of the sector when the pandemic permits.