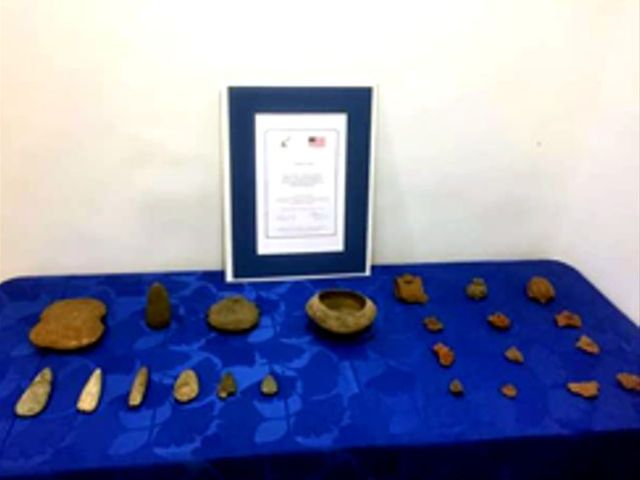 The 23 pre-Columbian artifacts werepresented at the headquarters of the Ministry of Culture in Dominican Republicduring an activity chaired by the United States ambassador, the Minister ofCulture Pedro Vergés and the HSI Special Agent in Charge in Charge in PuertoRico, Ricardo Mayoral.

“The Tainan pieces we have here aretestament to the rich heritage of this nation and its indigenous roots,” saidAmbassador Brewster. “The repatriation of these artifacts guarantees thatDominicans will be able to observe and learn from the traditions of theirancestors.”

Among the repatriated pieces are a vesseldating from 1200 to 1450, petaloid axes, a chisel, a petaloid wedge and a conebeater, among others.

HSI plays a leading role in criminalinvestigations that involve the illicit importation and distribution ofcultural property, as well as the illegal trafficking of artwork, specializingin recovering works that have been reported lost or stolen. HSI’s InternationalOperations, through its 69attaché offices in 47 countries, works closely withforeign governments to conduct joint investigations.

HSI’s specially trained investigatorsassigned to both, domestic and international offices, partner with governments,agencies and experts to protect cultural antiquities. They also traininvestigators from other nations and agencies to investigate crimes involvingstolen property and art, and how to best enforce the law to recover these itemswhen they emerge in the marketplace. Those involved in the illicit traffickingof cultural property, art and antiquities can face prison terms of up to 20years, fines and possible restitution to purchasers of the items.