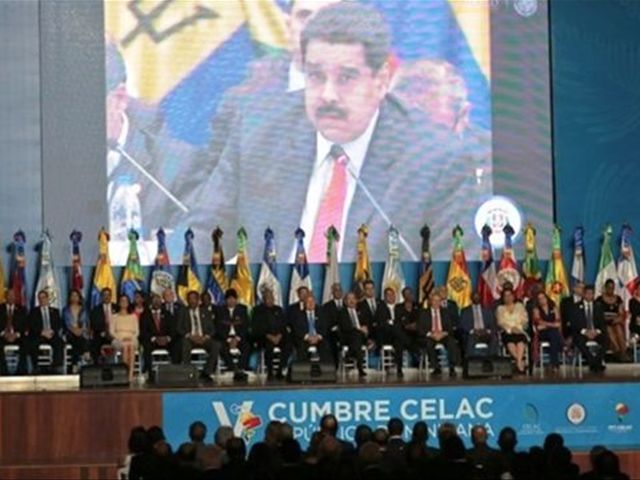 Punta Cana, Dominican Republic.- The Communityof Latin American and Caribbean States (CELAC) concluded Wednesday in theDominican Republic its fifth summit with a timid statement against the US’ new policies,despite that most of the presidents present are from the left-leaning Bolivarianbloc, with support for Venezuela and the end of the US blockade against Cuba.

On the day US president Donald Trumpannounced the "immediate construction" of the wall along the US-Mexicoborder, CELAC simply condemned the "criminalization of irregularmigration" and sidestepped any declaration against the wall.

In its Political Declaration of Punta Cana, thebloc adopted 70 points among special plans of action, in which the 33 CELAC countriesrebuke "racism and xenophobia" and simply ask to recognize the "contributionsof migrants in countries of origin and destination."

Not even Mexico’s representative at thesummit, deputy Foreign minister Socorro Flores, referred to the wall in herspeech.

It was CELAC’s first summit since the real estatemogul took office but squandered an opportunity for the region to establish stanceagainst the US president’s anti-immigration rhetoric.

The expectations of the summit d, which drew thefewest presidents since created in 2011, began to deflate as the leaders ofMexico, Panama and Colombia canceled their at the last minute, citing agenda issues.

The leaders of the Bolivarian bloc (Cuba,Venezuela, Ecuador, Bolivia and Nicaragua) and those of the Dominican Republic,El Salvador, Dominica, Haiti, Guyana and Jamaica took part, but delivered long-windedspeeches short of what the geo-political situation requires.

Nonetheless the issue highlighted in thefirst points of the final declaration was the dialogue between the Governmentof Venezuela and the opposition, which in December entered a "reviewphase" because both parties were accused of breaching the agreements .

The CELAC supports "the process ofnational dialogue" in Venezuela and urged the parties "to resumetalks in good faith and with high constructive commitment and with fulladherence to the rule of law, Human rights and democratic institutions."

The leaders also agreed to demand the repealof the "Executive Order of the United States of America originallyapproved on March 9, 2015," which imposes economic sanctions againstVenezuelan officials, an end to the US blockade of Cuba and the return ofGuantánamo.

The hand over to the Caribbean island of thisUS military base is, according to the statement, "an important element ofthe process of normalization of relations between both countries"initiated in 2014 and "welcomed " today in the presidential event ofPunta Cana.

The summit’s final text also includes aseries of commitments from heads of State that had already been adopted at othersummits. These include strengthening the fight against corruption, drugtrafficking and climate change, improving judicial cooperation, eradicatinghunger and promoting policies for gender equality and youth.

As a final act and after the speech of theLatin American representatives, the Dominican Republic transferred CELAC’s revolvingpresidency to El Salvador.

Upon receiving the organization’s presidency,El Salvador president Salvador Sanchez note that "a community implies unityand brotherhood respectful of diversity," a phrase that, given the scarceattendance of leaders and its marked Bolivarian character, seems to be more pressingthan ever.