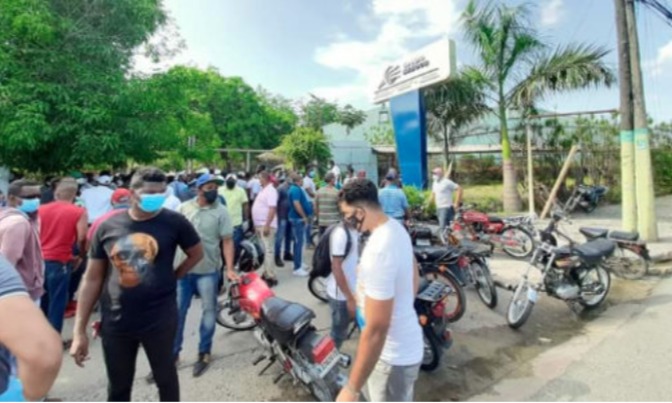 Dozens of employees of the company Alambres Dominicanos, who have been suspended for more than two months, stationed themselves in front of that company’s facilities, in the municipality of Haina, to demand that they are returned to their jobs, as they were notified of a suspension Next, what they claim is illegal because it violates the provisions of the Labor Code.

“We require the representatives of the company to stand up, since they suspended us for 60 days, after which they sent another suspension until July 1, which is illegal, because the law does not allow you to do two suspensions in the same year. Suspensions can only be for up to 90 days and period,” said one of the workers, who did not want to give his name to avoid retaliation.

The protesters said that during those 60 days of suspension, about 200 workers have been abandoned by both the company and the government, as they have not even been included in the FASE employee assistance program.

“The company does not make arrangements for us to be included in the PHASE program, but neither does it pay us compensatorily, so that with the money we have, we can solve our problems, in the meantime,” said another employee.

They stated that they are parents and that for all those days without receiving wages, they have had to go into debt in order to support their homes.

They asked President Danilo Medina and the Minister of Labor, Winston Santos, to intervene in the situation, in order to seek a solution to the dire situation that they and their families are experiencing.