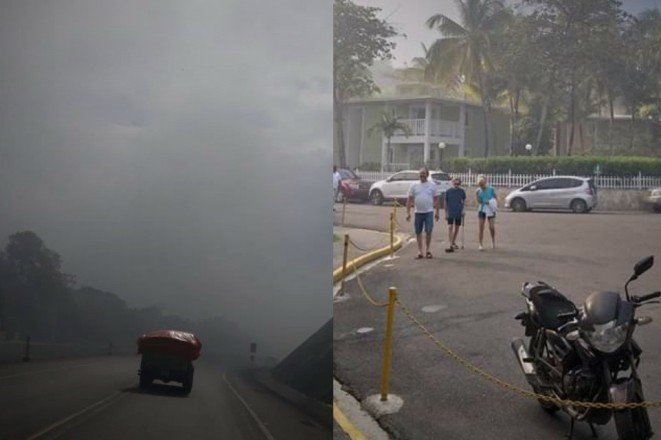 The situation that also causes terrible damage to the environment of the region, has reduced the hotel activities in the complex of the company Senator, in the Bay of Maimon.

PUERTO PLATA .- The dense smoke that originates from the landfill located at the entrance to this city San Felipe de Puerto Plata , continues to affect visibility on the road and generates chaos for tourist activities.

This situation, which also causes terrible damage to the environment of the region, has reduced the hotel activities in the Senator company complex, in the Bay of Maimon.

It was reported that dozens of tourists staying there, have had to lock themselves in hotel rooms to avoid breathing toxic smoke from the municipal landfill of Puerto Plata .

The smoke caused by the burning of tons of garbage, also affected the recreation of approximately 10 thousand visitors who arrived today at the terminal “Amber Cove” on board two Carnival Cruise Lines ships.

While residents in this jurisdiction popularly called “The Bride of the Atlantic”, continue to criticize the competent authorities for neglecting to solve this problem. Asserting that for more than a decade, there has only been much talk and nothing concrete is being done.

The same authorities are the ones that are disrupting Puerto Plata tourism since they had to look for all available resources to put out that fire so our visitors are not greeted by the toxic smoke from the landfill, “said communicator Luiyi Peralta.

Several people consulted agreed that due to the lack of will shown, we must render a vote of punishment to the municipal authorities, who could have requested help from the State yesterday to placate the minister of the landfill , but it was not done.