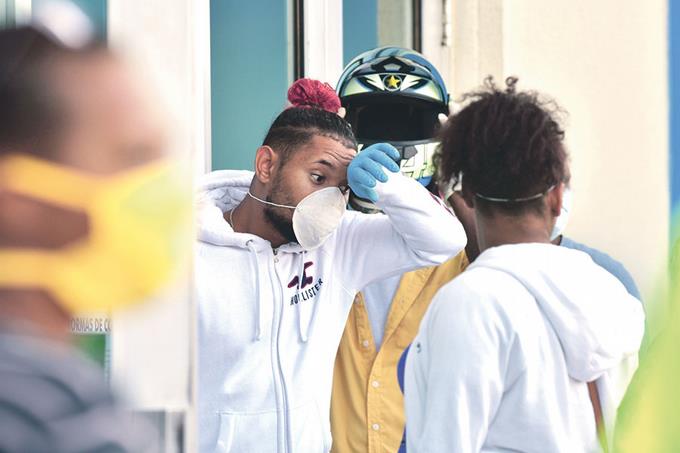 When the virus circulates in the community, reinforcing hygiene and distance is essential.

The great day of simultaneous cleaning that begins today at 10:00 in the morning throughout the country has broad national support from the Ministry of Public Health, the municipalities, the Dominican Municipal League, and the largest chain stores and supermarkets, to face the coronavirus pandemic.

Yesterday, enthusiasm grew in the most diverse sectors when understanding the importance of this national effort proposed by Listín Diario on Tuesday in its editorial, which seeks to deepen the awareness that hygiene, protection, and social distancing are the keys to avoiding contagion of the Covid-19.

The Health Minister, Dr. Rafael Sánchez Cárdenas, reported yesterday during the press conference that the ministry in his charge joins the # LimpiemosElpaís conference proposed by Listin. And that they are also going to reinforce the fumigation and sanitation of homes where some may be infected.

Sánchez Cárdenas said that is precisely why he will not offer the newsletter with the situation of the coronavirus in the country on Saturdays to focus on fumigation days and interventions in homes that have positive and suspected COVID 19 in the country.

He assured that the bulletins would be from Monday to Friday, jumping on Saturdays, and continue on Sundays, because Saturdays will be for operations on confirmed and suspicious people.

He said that they would concentrate the staff in the different provinces, which involves not only cleaning streets but also spraying with recommended disinfectants in homes where there are suspected cases, to promote sanitation. He affirmed that they are going to reinforce the control and supervision measures, ensuring, mainly, the points of highest incidence observed.

The Listín Diario newspaper has launched the campaign called # LimpiemosElPaís, which has not only received the support of the authorities but also of citizens who promise to clean their homes in-depth to prevent the spread of COVID19.

Yesterday the Ministry of Public Works reported that today it will continue to deepen its fumigation program in different regions of the country.

The Listin Diario initiative immediately received the help of the secretary-general of the Dominican Municipal League (LMD), Johnny Jones, the Administrative Minister of the Presidency, José Ramón Peralta, and the general secretary of the Social Christian Reformist Party (PRSC), Ramón Rogelio Genao. All valued the positive proposal of the director of this medium, Miguel Franjul.

In addition, the mayor of the National District, David Collado, and several local government executives welcomed the idea of ​​cleaning up cities.

In Santiago, Mayor Abel Martínez joined the proposal, as did Reynaldo Valera, Mayor of El Seibo, and Mayor of Hato Mayor, Odalis Vega. Also the mayors of the municipalities of the Puerto Plata province, headed by Walter Musa, as well as the president of the Playa Dorada Hotel Association and the Puerto Plata Tourism Cluster, César José de Los Santos.

The mayor of San Juan de la Maguana, Hanoi Sánchez, also endorsed the cleaning day, as did the mayor of Jarabacoa, Carlos José Sánchez. , as well as the Governor of Barahona, Carlos Manuel Florián; the elected mayor of the Santa Cruz municipality, Mictor Emilio Fernández, and the mayor of Neiba, Eliferbo Herasme.

Also, managers of condominiums and residential areas of Greater Santo Domingo joined the initiative, and the infectious disease specialist Josefina Fernández understands that simultaneous massive action of hygiene and disinfection of homes contributes significantly in the fight against the expansion of Covid-19 in the country.

The Health Minister explained that on Saturday, no bulletins would be issued on the evolution of the pandemic to concentrate staff on cleaning the streets and sanitizing the homes of those infected.