Abinader to gather Dominican Republic leadership due to Covid-19 crisis 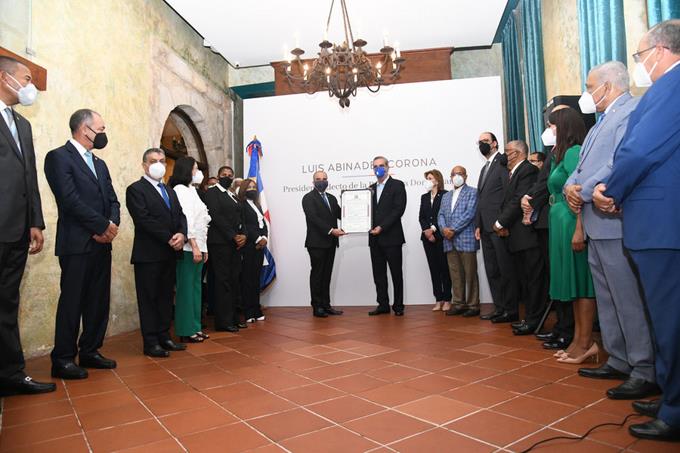 President-elect Luis Abinader yesterday considered the health problem to be very worrying and announced that in the next few days he will visit the entire political leadership to propose solutions to the health and economic crisis caused by Covid-19.

The president-elect also noted that they are preparing a plan to address and solve the country’s health problems, which will be announced next week.

During the delivery of the certificate of election as president-elect carried out by the National Assembly, Abinader said that he will visit the entire political leadership to hear solutions, modify the plans and, as of August 16, start taking measures to help the country out of the crisis caused by the pandemic.

The president-elect said he is putting the finishing touches on a plan to deal with the coronavirus epidemic, relaunch the economy and overcome the social difficulties that affect the Dominican people.

“We are going to visit the representatives of the different national sectors, including the political leadership, to present them with the proposals that we are fine-tuning, and once their opinions are known, we will refine the place,” said Abinader.

In the course of the electoral campaign that ended with his election as President of the Republic on the 5th of this month, Abinader repeatedly asked President Danilo Medina to bring together all the national leadership to seek solutions to the health crisis caused by Covid -19.

After the situation worsened after the elections, the Listin Diario newspaper proposed the urgent holding of a summit where all economic, social, and political sectors participate to confront this problem.

“With those proposals already presented to the country, we will start from August 16 on the adoption of measures that allow us to face the health, economic and social crisis that lies ahead,” said the president-elect.

He said that a fundamental aspect that the government will address will be that of the new school year, with solutions that will strengthen the national educational system.

He assured that he maintains the firm conviction that the dire situation in the country can only be controlled and overcome “if we are all united,” he declared upon receiving, together with Vice President-elect Raquel Peña, the certification of the National Congress as President-elect.

The National Assembly gave the certificate to President-elect Abinader. The delivery ceremony was held in one of the rooms of the Nicolás de Ovando hostel. The activity was also attended by the Vice President-elect, Raquel Peña, who received her parchment.

The delivery was made by a commission of legislators representing the National Assembly, headed by its current acting president, senator Alexis Victoria Yeb, vice president of the Senate, and representatives of the different parties in both houses.

Appreciating the delivery of the certificates, which took place in one of the rooms of the Nicolás de Ovando hostel, where their transition offices are located, Abinader gave guarantees to the legislators that he will maintain strict respect for the mandates of the Constitution and the laws.

The president-elect said that the act of awarding certificates was a step in strengthening democracy, since politicians who were confronted yesterday in the electoral contest, now carried out an institutional act that strengthens the entire country.

He reiterated that the new government that he will head as of August 16, will work in favor of all Dominicans, without distinction of any kind.