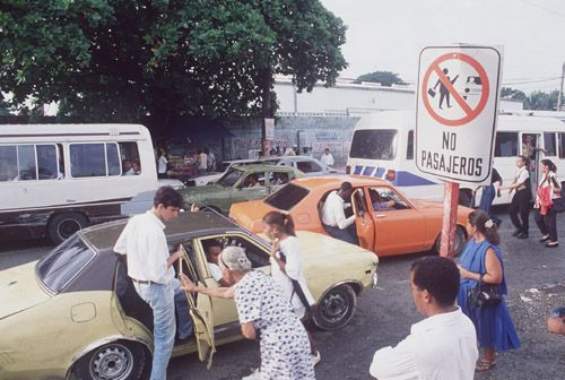 Santo Domingo.- The streets and avenues of Greater Santo Domingo, Santiago and other cities continue to be trafficked by run down vehicles that endanger the lives of passengers and affect the environment, despite the project initiated by the Transit overseer Intrant, to change units and create arteries.

For decades there has been talk of the removal of deteriorated vehicles from public passenger transport, with broken seats, no glass, damaged tires, mechanical failures and non-professional gas-fueled installations.

Passengers are forced to use them daily or occasionally as the only means of commute to and from their work or educational areas.

From the enactment of Law 63-17, on Mobility, Land Transport, Traffic and Road Safety, it was thought that the removal of junk passenger vehicles would work, which in turn would reduce the gridlocks because they would go out of circulation thousands of units, but as time passes the situation remains the same.

Around public 33,000 cars and buses circulate in Greater Santo Domingo, most of them without conditions to circulate due to their advanced deterioration and pollution that impact the environment.

A report from Internal Taxes (DGII) establishes that 42.7% of the vehicles that travel through the streets and avenues of the country have more than 20 years of manufacture and are mainly concentrated in the National District, Santo Domingo province and Santiago.

This banter about fixing the traffic chaos exacerbated by the junkers has a poor chance to progress beyond words.