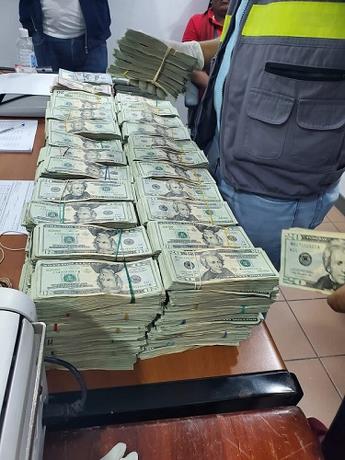 Santo Domingo, DR
The Directorate General of Customs (DGA) seized 879,020 dollars at the Gregorio Luperón Airport in the province of Puerto Plata.

The amount, equivalent to almost 48 million Dominican pesos, arrived in the country by general aviation, coming from the Bahamas and distributed in several suitcases.

According to the press release issued by the entity, the illegal cash shipment was detected when the passengers passed their luggage through the x-ray machine.

Its detection was possible because members of Customs, the Specialized Airport and Civil Aviation Security Corps (Cesac), and the National Drug Control Directorate (DNCD) noticed a suspicious profile in the luggage of one of the passengers. Hence, they proceeded to the manual check, where a large amount of money was found.

The agency also informed that two Bahamian nationals piloted the aircraft where the assets were transported. In addition, there were five passengers, a Haitian woman, and four Bahamian men.

Customs noted that all of them were detained and taken by the authorities to be brought to justice.

DGA authorities carried out the counting of the money in the presence of the Public Prosecutor’s Office.