Large film studio to be built in Puerto Plata 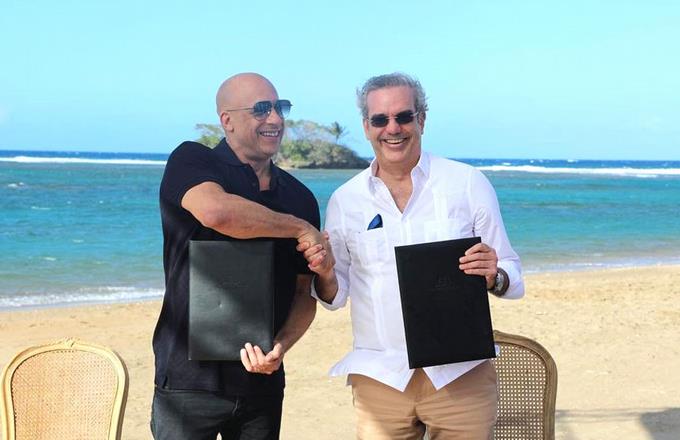 President Luis Abinader headed the signing of an agreement yesterday with actor and producer Vin Diesel and the company Blue Mangos Studios, for the construction of a first-class film studio, with the support of the experience and contacts of the famous character in the film industry.

“The time has come from Bergantín to fulfill our dreams,” said the president, when he announced the news that he defined as transcendental for the entire north coast and the country, highlighting the importance of the film industry to boost the reactivation of the tourism industry.

Film tourism has grown and has become an essential strategy for the promotion of the tourist destinations where the movies are filmed because many travelers want to visit the place they saw in the film, said the president who was accompanied by his wife, Raquel Arbaje; the ministers of Tourism, David Collado, and the Administrative of the presidency, Jose Paliza; the director of DGCINE, Mariana Vargas and the wife of Vin Diesel, Paloma Jimenez Diesel, and local and national officials. The agreement was signed on the beach, in the unique setting of Bergantin, just a few minutes from Playa Dorada.

My brother
Both President Abinader and the popular actor identified each other as “My brother,” highlighting the coincidence that both were born in 1967 a few days apart, but above all, the actor’s love for the Dominican Republic.

During the signing of the agreement, the Minister of Tourism, David Collado, affirmed that the Dominican Republic is the destination with the best-managed tourism in the region, taking it from 40,000 tourists at the beginning of the administration 250,000 tourists.

Collado indicated that thanks to work carried out by the present administration, in the specialized pages and search engines, the country is already the most searched for as the Dominican Republic, rather than a particular destination within the country.

Extensive day
During an intense day in the Atlantic bride, the president began his activities with the Sandra Ivelisse Corniel school’s inauguration of 14 classrooms in Montellano.

The school, built at 70 million pesos, also has two science laboratories, a computer laboratory, and two classrooms for children with special conditions.

During this inauguration, the head of state emphasized that today the country could have 60 or 70 more schools inaugurated but that a legal knot affecting more than 400 contracted schools and that more than 25 percent of the work has been executed has delayed them, but that in the next few days a solution to this situation will be announced.

Pumping stations
Together with the Minister of Tourism, the President, David Collado, inaugurated in the municipality of San Felipe the rehabilitation project of the pumping stations: Long Beach, Padre Granero I, Bello Costero, and Manolo Tavárez Justo, with an investment of more than 79 million pesos.

The work, built by the Ministry of Tourism (MITUR) through the Executing Committee for Infrastructure in Tourist Zones (CEIZTUR), will directly benefit a population of 69,823 inhabitants and indirectly 58,417 for a total of 128,240 inhabitants in the entire municipality.

At midday, together with the Minister of Sports, the President led the Fabio Rafael González Sports Center’s remodeling. The new administration also delivered the remodeling of 3 multi-purpose centers and ten sports courts in different sectors.

During the ceremony, the Minister of Sports Francisco Camacho said that the first visit he made was to Puerto Plata when he was appointed in charge and that he realized that what they received was a shell while proclaiming that today the change in the sport of Puerto Plata and the country has begun.

The President emphasized that he will be announcing the solution to these difficulties in the next few days, which he indicated are not due to corruption but of a legal nature, which has prevented him from having 60 or 70 schools inaugurated at present.

Roberto Fulcar
For his part, the Minister of Education Roberto Fulcar emphasized that the government currently has some 1,940 schools intervened to guarantee the best conditions for teaching in the country.

He indicated that simultaneously, work is being done in distance education and in the conditioning of schools for the gradual beginning of on-site education, which starts on April 6 with 2000 schools in 48 municipalities to guarantee the robust progress of Education.

Bergantín.
This area comprises a large plot of land in two large portions of 7 and 2 million square meters received by the Central Bank in payment of the debt of the State Sugar Council, CEA, with that entity years ago. It is being promoted as being for sale. The parcel comprises a strip of beach adjacent to other private properties in the area and close to Playa Dorada.

Coco de Agua
On the beach, the President and the popular actor Vin Diesel enjoyed coconut water and local fruits arranged in stations near the table where they signed the agreement.