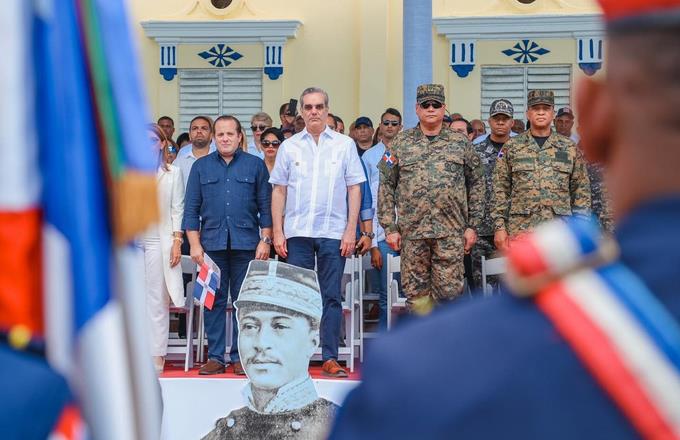 President Luis Abinader led the parade in honor of the 183rd anniversary of the birth of the hero of the Restoration Gregorio Luperón.

Puerto Plata, D.R.
With an investment of more than RD$520 million, President Luis Abinader yesterday inaugurated the Altamira-Rio Grande highway, the Las Canas bridge in the municipality of Imbert, and the repowering of the San Marcos electrical substation in this province.

Of this investment, RD$377 million corresponds to the road linking the municipality of Altamira with the municipal district of Río Grande. This project, about 20 kilometers long, benefits the 30,000 inhabitants that make up the surroundings of these two communities.

Also, the Las Canas bridge, which was built for RD$57 million, connects dozens of livestock and agricultural communities affected for years by the lack of infrastructure for regional development. In addition, the repowering of the San Marcos substation, replacing a 20-30 MVA power transformer for RD$86 million.

The Minister of Public Works, Deligne Ascención, announced that RD$170 million were made available for the construction of sidewalks and curbs in this province’s municipalities and municipal districts. In addition, a motorized pedestrian bridge will be built in Altamira.

Earlier in the day, the President headed the 51st “Primero Tú” (First You) social inclusion day, which is being carried out by the government through the General Directorate of Strategic and Special Projects of the Presidency (Propeep), in favor of people in vulnerable conditions.

To date, about 130 thousand people have benefited throughout the country with these days. Yesterday, more than 2,000 people were treated.

In the activity held in the Nepomuceno Ravelo elementary school, the municipality of Imbert, the head of state, said that the government is doubling the social aid to reach those who need it most.

Parade in honor of Luperón

President Abinader also led the civic-military parade on the occasion of the 183rd anniversary of the birth of the restoration hero General Gregorio Luperón, accompanied by members of his cabinet and military and local authorities.

After the cannon fire in honor of the military hero, who was also President of the Republic, the parade of the military units began under the direction of the commander of the second brigade of the Army, General Fernando Arturo Pérez Jiménez.

The President was accompanied by the Administrative Minister of the Presidency, José Ignacio Paliza; the President of the Permanent Commission of National Anniversaries, Juan Pablo Uribe; the provincial governor, Claritza Rochtte; the senator Ginette Bournigal, the mayor Roquelito García, deputies Johnny Medina and Emil Durán, and the vice administrative minister Igor Rodríguez, among other officials.

Thousands of people watched the parade on the seafront of Puerto Plata with the participation of different military units of the country, students from other schools, and representatives of local civic organizations.

President Abinader, before leading the parade, visited the House Museum of General Gregorio Luperón, receiving details of its facilities and the services it provides as national and foreign tourists visit it.

The President also made available RD$150 million to remodel the José Briceño Stadium of Puerto Plata, with a joint effort of the Bishopric and the administrative ministries of the Presidency and Sports.

Nothing said about money being set aside for the deteriorated Cangrejo Bridge?