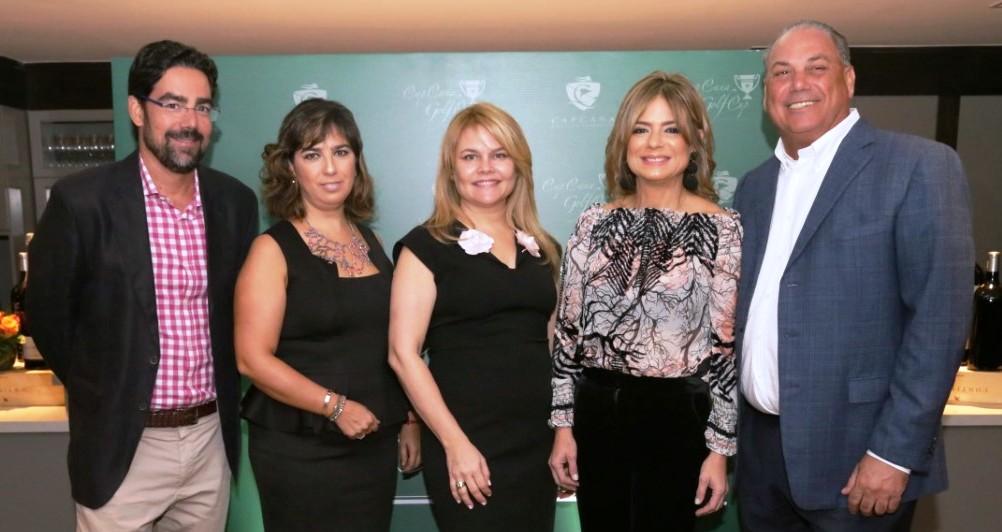 Cap Cana, Dominican Republic. – The hotel, tourism and real estate destination, Cap Cana, announced its traditional tournament Cap Cana Golf Cup 2017, on the occasion of the 11th anniversary of the renowned Punta Espada Golf Course, a signature design of Jack Nicklaus. This 5th edition of the tournament, to be held on the 1st and 2nd of December, will be in benefit of the Forjando un Futuro Foundation.

Ricardo Hazoury expressed that “Cap Cana as a socially responsible institution and committed to the welfare of society, is very pleased to gather again, passionate golf players who have integrated on this fifth consecutive year to this tournament to support this noble cause, contributing to this meritorious work carried out by the Forjando un Futuro Foundation in benefit of the most vulnerable communities in the province of La Altagracia, offering through its various aid programs, opportunities so that these communities can have better living conditions.

Efren Garcia-Estrada, Director of the Punta Espada Golf Course, highlighted that “on this occasion, we will have a invitational tournament for owners, related guests and golfers who have supported the Foundation since its origins, having a total of 200 players invited, who along with their companions can enjoy an exclusive agenda of sports and social activities throughout the weekend, in the different locations of Cap Cana, concluding with the traditional Grand Anniversary Party, “Safari.” He added that “the tournament will be played in a round of 18 holes, under the in pairs Scramble format, with categories A, B and C. The scoring system of the tournament will be in real time with the VPAR technology, so that players will be able to know the results immediately after the game has ended.”

The Punta Espada Golf Course, opened in July 2006, a signature design course of Jack Nicklaus, considered the best golfer of all time and one of the most prominent golf course designers in the world. Listed as “unique and spectacular,” having in mind that 8 of its18 holes are in front of the sea and that each and every one of the 18 holes has views of the Caribbean Sea. Its design incorporates the natural features of the landscape to its topography: the cliffs, the beach, creeks and the foliage, guaranteeing the enjoyment of golfers of all levels, including those who participate in world championships.

Punta Espada is a challenging par 72 golf course, which has been ranked since 2008 as the #1 golf course in the Caribbean and Mexico by Golf Week magazine.” In addition, it is considered by Golf Digest as one of the 100 best courses in the world.

It is currently in the 3rd rank of the golf courses designed by Jack Nicklaus, according to the “Links” magazine, and recognized as one of the best in the world by the “Robb Report” magazine. Punta Espada was the host venue of the Cap Cana Championship,” official tournament of the PGA Champions Tour held in 2008, 2009 and 2010.

Its exclusive Club House has a breathtaking view towards holes 10 and 18, the practice range and the Caribbean Sea. It counts with beautiful and magnificent facilities with unique services such as a reception area, pro shop, bar, restaurant, lockers and changing rooms, among others.

The Forjando un Futuro Foundation is an entity that flourishes out of the hands of a group of people who unified their ideas under the seal of helping the most vulnerable in the area of the La Altagracia province and surrounding areas.

The main axis of Forjando un Futuro are children, which is the reason why a day care center was created that would allow parents to leave their children well taken care of and be able to go to work. All of this, after making a survey of which were the prioritizing needs of the community. From this bloomed what is known today as the “Pequeñas Cometas” Day Care Center, located in “Nuevo Juanillo,” the first project of the Foundation, which has been growing each year, always integrating the parents of the children, in the process of training and education.

With the support of UNIBE, environmental training workshops and mission trips have been held to educate the entire family and together forge a community of men and women committed to their environment. Likewise medical mission trips, recreational events and family integration activities have been held. The funds raised in the Cap Cana Golf Cup have been destined to give continuity to current projects, such as the execution of plans in environmental awareness, art and sports workshops, vaccinations and medical mission trips, among other social improvement plans.