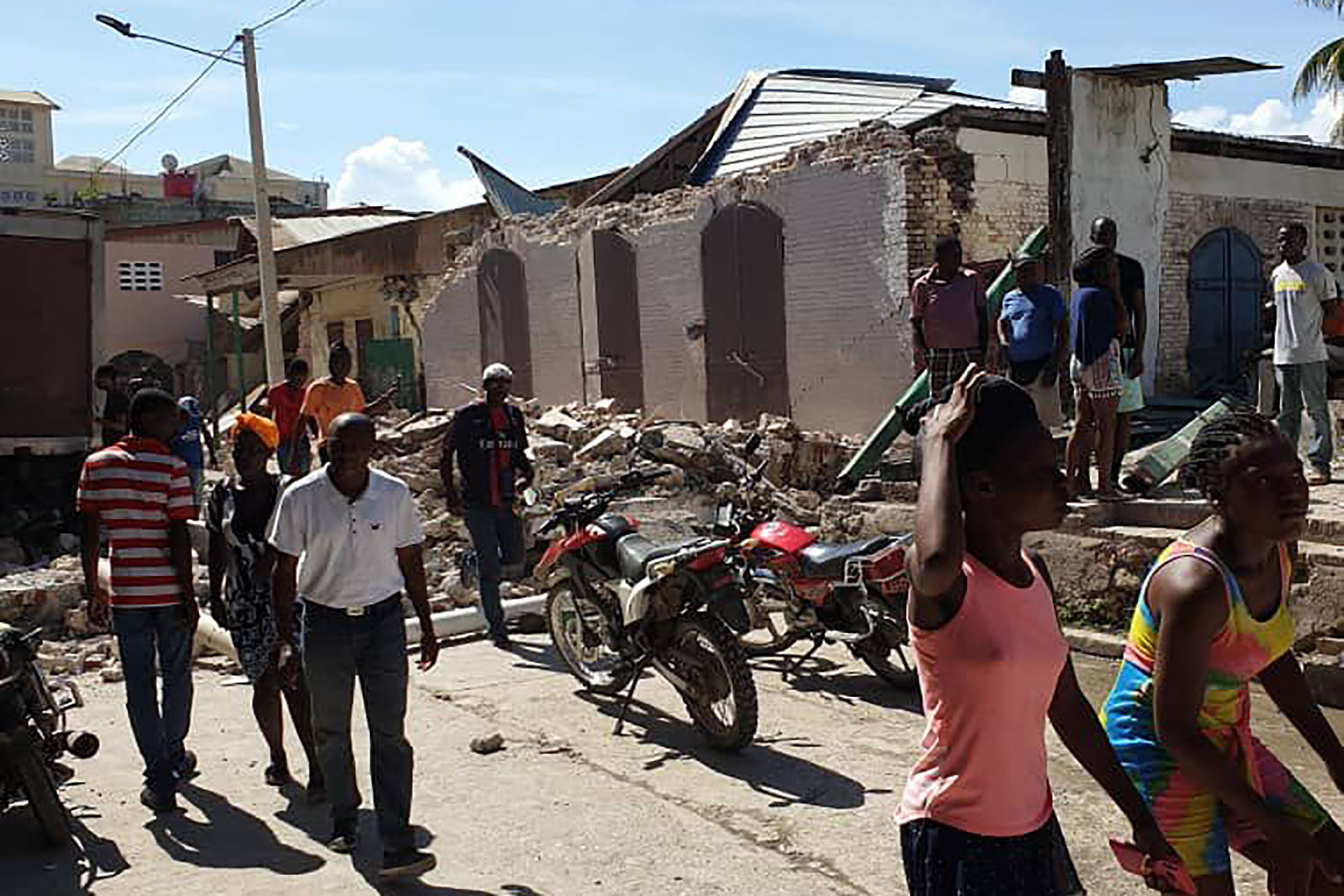 People around destroyed buildings. / AFPPeople watch destroyed houses after an earthquake struck on August 14, 2021 in Jeremie, South West Haiti. - A powerful 7.2-magnitude earthquake struck Haiti early Saturday, killing people and toppling buildings in the disaster-plagued Caribbean nation still recovering from a devastating 2010 quake. The epicenter of the shaking, which rattled homes and sent terrified locals scrambling for safety, was about 100 miles (160 kilometers) by road west of the center of the densely populated capital Port-au-Prince. (Photo by Tamas JEAN PIERRE / AFP)

Rescue teams are racing to find survivors of the powerful earthquake that struck Haiti on Saturday, killing at least 304 people and shattering buildings in a poor, disaster-plagued country that has yet to recover from the devastating 2010 quake.

The 7.2 magnitude quake shook houses and forced people to seek shelter, and had its epicenter about 100 miles from the Haitian capital, Port-au-Prince, according to the U.S. Geological Survey (USGS).

The earthquake left at least 304 dead, according to a count released late at night by Jerry Chandler, director of civil protection.

“Many houses are destroyed, there are dead and many are in hospital,” Christella Saint Hilaire, who lives near the epicenter, told AFP.

According to Chandler, hospitals in the worst-hit regions were already facing difficulties in providing emergency care, and at least three health centers in Pestel, Corailles, and Roseaux were entirely overcrowded with patients.

“Houses and the walls around them have collapsed. The roof of the cathedral collapsed,” said Job Joseph, a resident of the town of Jeremie, in the far west of Haiti.

Countries in the Americas and Europe expressed their sorrow and willingness to help Haiti.

“I am saddened by the devastating earthquake” in Haiti, said President Biden, and stressed the implementation of “an immediate response” of aid.

The 253 Cuban doctors deployed in Haiti went to the earthquake zone to treat the wounded and adapt a hospital in Port-au-Prince, until now used for patients of the Covid 19, informed the head of this brigade on Cuban television.

Spain also extended its hand. “You can count on Spain’s support to move forward after this terrible event,” Prime Minister Pedro Sánchez told the Haitians.

– Solidarity, not panic – The government declared a one-month state of emergency following the disaster, and Prime Minister Ariel Henry called on the nation to “show solidarity” and not panic.

Radio Rebelde said the initial prolonged shaking was felt throughout much of the Caribbean, including in Santiago de Cuba (about 300 km from Saint-Louis-du-Sud), where many residents left their homes.

The USGS initially issued a tsunami warning, predicting possible waves of up to three meters along Haiti’s coast, but lifted it shortly after.

Damage in Les Cayes appears to be significant, including the collapse of a multi-story hotel.

Residents shared images on social media of the ruins of concrete buildings, including a church where a ceremony was being held Saturday in the southwestern town of Les Anglais.

– One tragedy after another – A magnitude 7.0 earthquake in January 2010 left much of Port-au-Prince and nearby towns in dusty ruins. It killed more than 200,000 people and injured another 300,000.

More than 1.5 million Haitians were left homeless, leaving the island’s authorities and the international humanitarian community facing a colossal challenge in a country that lacks a land registry and building codes.

That earthquake destroyed hundreds of thousands of homes, as well as administrative buildings and schools, as well as 60% of Haiti’s healthcare system.

Reconstruction of the country’s main hospital remains incomplete, and non-governmental organizations have struggled to make up for the state’s many shortcomings.

The earthquake comes just over a month after President Jovenel Moise was assassinated by an armed commando, shocking a country struggling with poverty, growing criminal gang violence, and the covid-19 pandemic.