Defense: US troops on Dominican soil are not to attack Venezuela 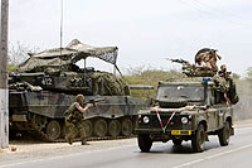 Havana said the alleged air movements from February 6 to 10 form part of a “military adventure disguised as a humanitarian intervention of Venezuela.”

According to Cuba’s Govt., the exercises have been staged in the Dominican Republic and Puerto Rico, as well as other Caribbean islands.

“It’s false. There are no United States troops here. Nor has the San Isidro air base been used for these purposes, “said the defense minister quoted by outlet Listin.

The official added that Dominican and American troops are conducting search and rescue exercises at the Dominican Navy base, Bahía las Calderas, in Baní (south). “These are routine exercises that are done every two years between both countries.”