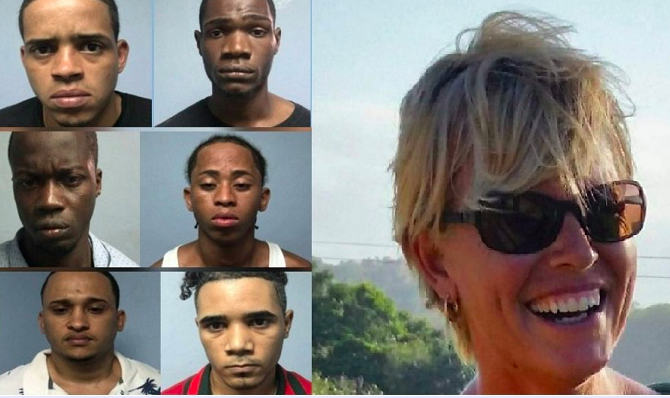 The latest reports reveal that the police were able to promptly solve the 63-year old Patricia Ann Anton murder case because one of the robbers used the victim’s cell phone to call a friend. Anton was strangled to death on the evening of Monday, 11 November 2019. She had just moved into a new apartment in the Casa Yagua complex, Cabarete, Puerto Plata.

The report indicated that police were able to track down the men and arrest them. One person, supposedly a Venezuelan, is still on the run. The newspaper’s informant says that the person who received the call in Santo Domingo was investigated but released without charges. He did cooperate with the police leading to the arrest of six men.

At large is so-called Eiden (El Venezolano), who took a laptop computer, a 40-inch television, and about US$80 from the victim’s apartment, located in the Pro-Cab residential complex in Cabarete.

The informant said that those under arrest had traveled to Puerto Plata in a black Sonata rented in Santo Domingo. One day before committing the crime, the group had robbed a colmadón (local market) in the municipality of Altamira, where they stole RD$100,000 (USD 1,889), a large number of alcoholic beverages, cell phones, and personal items of the owner of the colmadon and his personnel.

A source from the prosecutor of the judicial department of Puerto Plata explained that the suspects would first face charges for the Altamira robbery and later for the murder of the American teacher.

According to initial investigations, the gang traveled to Puerto Plata and the surrounding communities to carry out robberies in the area.

On one of these raids, they came to the home of the US citizen, who had lived in Cabarete for many years. The men had tied, gagged, and tortured the woman. The victim died as a result of the torture, according to the forensic scientist she was suffocated. After the murder, as has been previously declared, the perpetrators from the apartment took a laptop, a 40 inch TV, and about USD $80, then fled.

The police began the investigation and identified four people during interrogation and review of the archives. Andújar Mella, Mariñez Rosario, and the Haitians Maquey (Luisito) and Junior Alexis Suarez (Liquide) were already known to the police for various crimes between the years 2007 – 2019.

The informant said that the group was able to enter Anton’s apartment when one of them, whose name he did not reveal, went for a walk on Cabarete beach and observed that the foreigner lived in an unmonitored place. He informed his partners of the potential victim, and the men proceeded to enter the apartment to rob and kill her.