DGA defends itself against complaints in baggage handling and lags 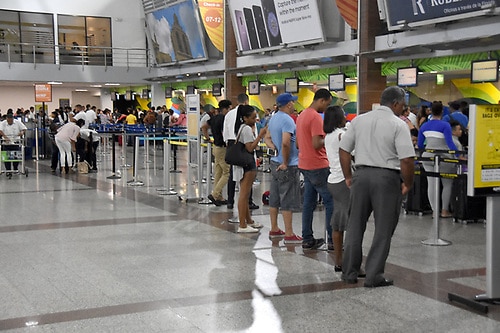 SANTO DOMINGO, Dominican Republic.- The General Directorate of Customs (DGA) clarified on Thursday that, after the arrival in the national territory, there are several entities, both official and the airlines themselves, which are involved in the process of leaving travelers, regarding luggage, lags and delays in the environment of arrival of passengers at airports, particularly in the Americas International Airport (AILA).

Customs issued a press document explaining its role and recalling the parties involved in the baggage inspection hall, this in the face of passenger complaints that attributed difficulties with their luggage to the institution.

Among the actions attributed to the DGA and which, he stressed, did not compete, he cited the verification of luggage identification tags made by an airline, before the traveler goes to the Customs officer.

“That review to confirm that the label of the suitcase matches the password held by the owner, is a practice of the airlines that only have in the Dominican Republic and that, of course, generates delays and creates confusion.”

Other facts that are awarded to him are the delay between unloading it from the plane and mounting it on the distribution belts, responsibilities both that correspond to the airlines and the companies that serve on the ramp.

With regard to the application of Christmas Grace, which exempts Dominicans residing abroad from paying taxes on gift items with a total value of up to US $ 3,000.00 this year, in the period from December 1 to January 7 In 2020, he explained that Customs personnel process it fluently and stressed that only ten families have opted for this facility, to date.

The note incorporates the results of the periodic survey of customer satisfaction carried out by the company Aerodom, through the tool “FeedbackNow,” and in which, as of December 26 in progress, the DGA appears with 84.9% of votes positive, 8.8% negative and 6.3% neutral, according to the data provided by Crioni Belliard, Customer Service Manager of the airport operating company, who congratulated the institution for maintaining satisfaction levels above the goal all year round of 80% established for 2019.

The General Directorate of Customs recalled that in the AILA permanently operates an inter-institutional facilitation committee and took the opportunity to reiterate that its personnel in ports and airports was reinforced this Christmas season and duly instructed to offer all the attention, without detriment to the exercise of your responsibilities.