Political barter: 17 more days are approved for the State of Emergency in Dominican Republic 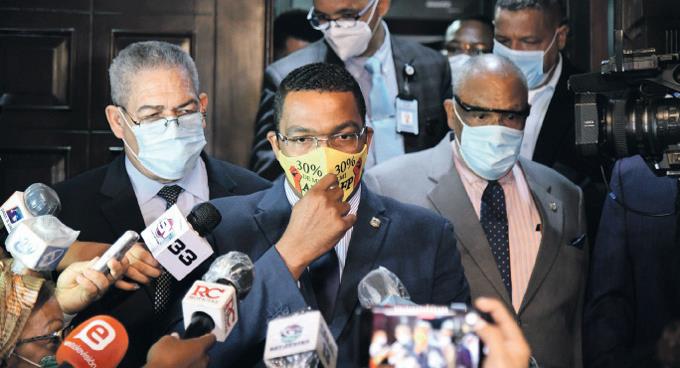 The reformist deputy Pedro Botello justified the agreement with the government to vary his position. RAÚL ASENCIO / LDblock opponent in the chamber

The extension of the state of emergency due to Covid-19, which will now end five days before the presidential and congressional elections on July 5, was the result of a negotiation called 30 by 17, where deputies from the opposition Christian Social Reformist Party were involved. (PRSC).

The extension will take effect tomorrow and will end on the 30th of this month, that is, two days before the limit is reached so that the presidential and legislative candidates can campaign in accordance with the provisions of Law 15-19 on the Electoral Regime.

Serious historical error
Yesterday former President Leonel Fernández, presidential candidate of Fuerza del Pueblo and ally of the PRSC, described the approval of the extension of the state of emergency as a serious historical error since the country is in the last phase of the electoral campaign which means freedom of movement, freedom of contacts, freedom of expression, while the decision means restriction of freedoms.

Fernández assured that the approval was unfortunate and that it was not done for the health of the people, but for electoral political reasons where it was not due to the circumstances.

The explanation given by the reformist deputy Pedro Botello on his way out of the Chamber of Deputies session was that “the PRSC had to find an ally for that, we negotiated with the Government, just like that, 30% of the AFP and extension of the national emergency deadline,”

Botello had denounced a week ago that the government offered more than 100 million pesos to four deputies, in exchange for the 17-day extension of the state of emergency requested by Congress by the Executive being approved.

Yesterday the legislators of the Dominican Liberation Party (PLD), although they are not the majority in that chamber, managed to convince several deputies of the PRSC in an eventful session, with the commitment that they will vote in favor of the bill that would free 30% of the accumulated of each worker in the Pension Fund Administrators (AFP).

While deputies from the parties Modern Revolutionary (PRM) and Fuerza del Pueblo, who maintained their rejection of the extension of the state of emergency, pointed to two colleagues as being mainly responsible for what happened, Botello and Máximo Castro Silverio, spokesman for the PRSC.

The explanation
“The only one arguing for 30% was me. We did the right thing, what we had to do. We negotiate on behalf of 4.3 million Dominicans. Now they have to approve it or they will face the people. Today (yesterday) it was approved, they complied,” added Botello, after leaving an opposition bloc in the lower house.

Both Castro Silverio and Botello stated that this decision was made after being consulted with the president of that party, Federico (Quique) Antún.

Extends emergency
President Danilo Medina yesterday extended for the fifth time in a row the state of emergency throughout the country, this time for 17 days, starting tomorrow.

The provisions are contained in Decree 213-20, released by the Presidency spokesman, Roberto Rodríguez Marchena.

It establishes in its first article that the state of emergency is prolonged, by virtue of the authorization granted by the National Congress, through resolution 67-20.

The Executive also established that only purchases and contracting of goods and services declared emergency may be carried out, through decree 133-20 of March 19 and its modification, if they are previously authorized by the Emergency Committee and Health Management to combat of COVID-19, via the High-Level Commission for the Prevention and Control of coronavirus.

DECREE
Curfew for 14 more days
From 8:00 PM.
President Medina extended the curfew for 14 more days, from tomorrow until Saturday 27 of this month. But the schedule is varied, because this time the national curfew starts at 8:00 at night and ends at 5:00 in the morning, every day. Decree 214-20 also included during the curfew, the circulation of officials of the Central Electoral Board and municipal electoral boards that work in the assembly of the next elections.