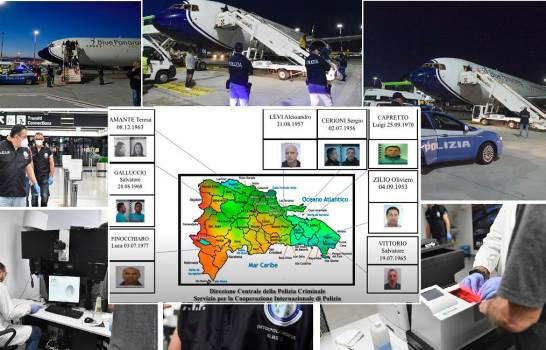 Image published in the Italian media internapoli.it about those arrested by Interpol on Dominican soil. (EXTERNAL SOURCE)

At first glance, they gave the appearance of businessmen or foreign gentlemen who settled in the country to live their retirement. Some went on to raise families, have children, and get married, however, all that appearance was unmasked when they were arrested and Interpol revealed that they were eight members of a powerful Italian mafia. They are designated as members of the Clan Contini, one of the most powerful in Naples in Italy

In their country, the ex-fugitives have convictions that include money laundering, drug trafficking, fraud, among other crimes and infractions, but they managed to escape to Santo Domingo, where in addition to living a life of luxury, they continued in the “shady businesses.” According to the investigations, these had introduced large sums of money, of illicit origin, to launder it in commercial activities in which they were engaged in the country.

One of the detainees is Salvatore Vittorio, 55 years old. According to a judicial document submitted by Salvatore to try to be released after his arrest in the country, it was learned that he had established a residence in Santiago de los Caballeros, the city in which he was arrested at the time he was leaving his home to take his two children to school.

In his country, Salvatore is identified as one of the members of the Camorra “Contini” clan and was being sought internationally by a mafia-type criminal association.

Another of the alleged gangsters arrested in the city of Santiago was Sergio Cerioni, 64 years old. According to the Italian news portal Corriere del Veneto, Sergio Cerioni is married to a Dominican woman and was involved in the restaurant business, but in Italy, he is convicted of an association for illicit drug trafficking.

The Corriere del Veneto portal also offers other information on the history of the other prisoners. He mentions that Oliviero Zilio, 67, is a divorced man who owns a tourist center in the country, in which he lived until he was arrested. While in Italy he is convicted of fraudulent bankruptcy and financial crimes.

Luca Finocchiaro, 43, is identified as the head of a criminal structure that has trafficked large amounts of cocaine from the Dominican Republic to Italy through airports, allegedly coordinated with service personnel at Dominican air terminals.

In the DR, he was known as a prosperous restaurant entrepreneur. One of the well-known businesses that Luca Finocchiaro operated in the DR is La Pesca de Oro, which has a location on Avenida España in Santo Domingo East, among other branches.

Luigi Capretto, 50 years old, is convicted in Italy of illicit drug trafficking, while in the DR he lived in Santo Domingo, is married, and has a teenage daughter.

Another of those captured in Dominican territory was Salvatore Galluccio, 52, who in Italy is convicted of crimes of counterfeiting and drug trafficking, according to the criminal record published by Corriere del Veneto.

As for Alessandro Levi, 63, in Italy, he is accused of fraudulent bankruptcy, while here in the DR he was enjoying Caribbean life.

Teresa Amante was the only woman detained in the group. She is 57 years old and has sentences in different parts of Italy for crimes ranging from fraud, extortion and, according to the Italian media, she is an expert in stealing valuable jewelry from elderly women. In the DR she lived enjoying the beauty that the Caribbean offers.

Silence in the Dominican Republic
The Dominican authorities have not offered any information regarding this operation, which they called the “Open World” and which had been carried out in Dominican territory for months by Interpol Italiana and the Dominican agencies, among other foreign investigative organizations.

Diario Libre learned of the information after receiving judicial instances brought by several of those captured, alleging that they kept him in an illegal prison for more than a month and were requesting his release.Based on these documents and other information, reporters from this medium began to trace information published in Italian media such as Corriere del Veneto, internapoli.it, as well as ilmattino.it, where all the details were published, both of the operations and of the criminal records of those arrested on Dominican soil.

The General Directorate of Migration (DGM), the Attorney General of the Republic (PGR), Interpol Dominicana, and the Judiciary were aware of this operation.