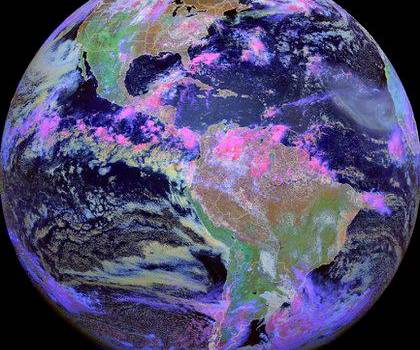 View of the areas that can be affected by dust from the deserts of Africa.

Sahara dust affects the Caribbean region annually, it is formed in North Africa due to low air pressures that cause a dust storm of sand. By convection of air masses in the desert, the sand particles form high layers in the atmosphere where they are carried by winds to different parts of the world.

Heriberto Florián, a forecaster of the National Meteorological Office (ONAMET), said that it is normal for dust from the Sahara to reach the country, mainly in June and July. He explained that “it almost always comes after a tropical wave” and that it does not necessarily have to be from the Sahara, but can also come from Israel, although that is less common.

He explained that this haze corresponds to dust particles suspended in the atmosphere that move from Africa to our region, increasing the thermal sensation (the sensation of heat by humidity in the environment increases).

He argued that next week a new wave of dust will come to the country, “the models indicate that a high concentration is approaching towards the Caribbean that would arrive in the middle of the week.” However, he assures that “at this time of the year it is common for a haze from the Sahara to arrive.”

Florián added that with the wave of dry powder the rain conditions will be limited and the sticky humidity sensation felt by the population will increase, so the heat will be felt more strongly.

He clarified that since the beginning of spring waves of dust come to this region, however, it is more noticeable during the months of June and July since that is when the dust travels in large concentrations.

Zones affected by the haze.

Dust is produced by collisions between the warm desert air with the fresh air of the Sahel region, south of the Sahara, where the third largest and hottest desert is located. In these conditions, rising particles swirl, intense trade winds begin to blow west into the North Atlantic where it is distributed to different parts of the world according to the course of the wind, according to warnings from sand and dust storms issued by the World Meteorological Organization (WMO).

Despite the fact that dust is attributed to negative effects on people’s health and the environment, deposits on the surface are also a source of micronutrients for the continental and marine ecosystems. For this reason, the particles from the Sahara could even serve as fertilizer in the Amazon forest because the iron and phosphorous that it transports favor the production of marine biomass in areas of the oceans where these elements are scarce, according to a report by the EFE agency.

At the same time, however, it can reduce crop yields and photosynthetic activity, and even decrease plant tissue and increase soil erosion on agricultural land, the WMO points out.

On the other hand, the aforementioned entity also cites that, “the inhalation of dust particles when the weather is hot and dry can damage the mucous membranes of the nose and throat, providing favorable conditions for a bacterial infection. Also, the iron oxide in the dust particles can increase the risk of infection.”

Given this, Florián said that the particles that will affect the nation can affect people who suffer from respiratory diseases, so they should not be exposed to much dust, however, when it is distributed in small quantities, it usually only causes allergies and limitations in the probability of rain.