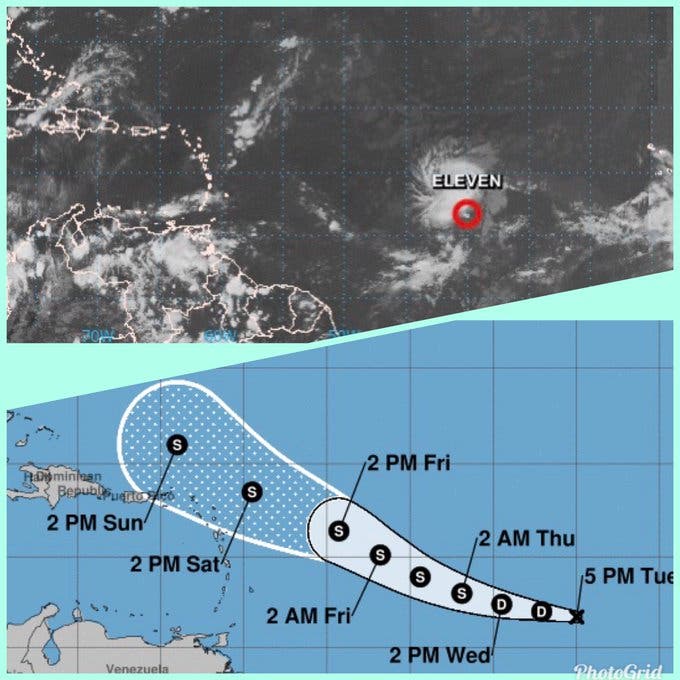 The National Meteorological Office (ONAMET) reported on the formation of tropical depression number 11, located about 2,300 kilometers east of the Lesser Antilles.

According to the forecasts of that entity, its maximum sustained winds are at 55 km/h with higher gusts and presents a movement towards the west at about 26 km/h.

Regarding the previous tropical wave, Onamet explained that it continues to move away from the country, currently located over Jamaica; However, the presence of a trough will cause isolated showers and distant thunderstorms in some localities of the northeast region, the Caribbean coastline, the eastern plains and the Central mountain range in the early morning hours.

Onamet also outlined that the recommendation to the general population to avoid exposure to solar radiation for a long time from 11:00 in the morning to 4:00 in the afternoon is maintained. Also, drink enough fluids and wear light clothes, preferably light colors due to the high temperatures that occur.

For its part, the National Hurricane Center (CNH) indicated that tropical depression number 11 is expected to move towards the west-northwest by tonight, at a similar speed.

The CNH predicted that this natural phenomenon could strengthen in the next 48 hours and expect it to become a tropical storm.

For today the Onamet asserts that the Greater Santo Domingo area will be partly cloudy at times with scattered showers and isolated thunderstorms. While the maximum temperature will be between 33ºC and 35ºC and minimum between 23ºC and 25ºC.

The Onamet meteorologist, Francisco Holguín, had said this Monday that the tropical depression, if it becomes a hurricane, could reach category 3, with a strong threat to the Caribbean through the route it presents.

“The zone of unrest continues to strengthen. Already with 60% tomorrow, it can be a depression. Potential for it to be the first major hurricane, that is, a category greater than 3 of the 5 that are forecast. Concern: threatens the Caribbean. The route is very energetic,” she wrote on her Twitter account.

For this Monday the Onamet indicated that rainfall will be scarce in most of the provinces due to the permanence of the anticyclone at various levels of the troposphere and values ​​of Saharan dust, favoring good weather conditions on the Dominican territory.

The floods that flooded homes and furnishings, left hundreds of families out in the open, without food or furnishings. The greatest drama was observed in the Gualey neighborhood.