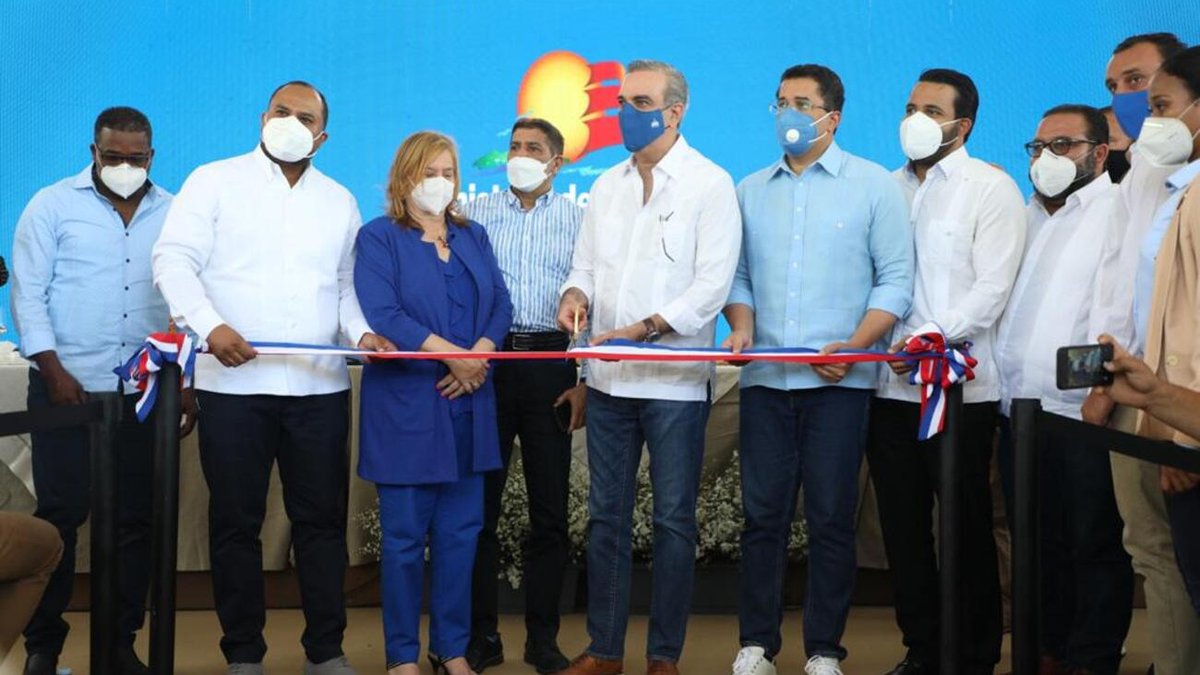 JARABACOA – President Luis Abinader inaugurated this Saturday the reconstruction of three road works in the municipalities of Jarabacoa and Constanza, La Vega province, with an investment of more than 300 million pesos.

Likewise, the governor gave the first kick for the continuity of the Belarmino Ramírez road project.

“Jarabacoa is special and has to be treated in a special way,” said Abinader.

He pointed out that it is also essential to combine the care of the natural resources and at the same time to be able to develop the area. He added that that combination and that necessary balance would be a great success for the region.

“I ask you, and this is the direction of our government, to always take care of our natural resources because this will be an economic, social and ecologically sustainable development,” insisted the President.

He said that if the natural resources are affected, Jarabacoa will also be affected economically.

President Abinader informed that he gave instructions to carry out a “master plan” study in the zone, with technicians from URBE, who have carried out urban transformations in other places.

He said that this plan would be presented to society this afternoon for discussion and analysis.

He emphasized that to contribute to improving the traffic from the Duarte highway to Jarabacoa, a proposal for an alternate road is being worked on and designed.

President Abinader also informed that he had instructed Edenorte to illuminate the area of Berlarminio Ramirez, to help in terms of citizen and road safety.

The president said that next week, a staff of the Ministry of Public Works would return to the area to evaluate the bridges’ situation and look for a definitive solution.

Regarding the route of the Cordillera Central, which joins Jarabacoa with Jánico, he said that he would study the project to see how to make it an ecological race and include it in the budget of the year 2022, but always taking care of the environment.

Abinader also stressed that the Jimenoa waterfall would be improved, “The Ministry of Tourism is also finishing the La Confluencia spa, which will be ready by the end of June, all this is being planned because it deserves it, it needs it and we must take care of it and we are committed to Jarabacoa,” said the governor.

The President said that Jarabacoa does not belong only to the province of La Vega, but it belongs to the country and is an oasis of tranquility.

The works inaugurated this Saturday by President Abinader were built by the Ministry of Public Works and Communications (MOPC).

On his side, the Minister of Tourism, David Collado, said he was proud to work with President Abinader, who every day goes out to work to seek a better future for the Dominican Republic.

He emphasized that despite all the obstacles that have been waged, this week has been the one with the highest flow of tourists arriving in the country after the pandemic.

“The Dominican Republic is rising with firm steps despite all the obstacles that are presented, because we are working with body and soul, mind and heart,” said Minister Collado.

He affirmed that the present government’s vision is to strengthen the infrastructures in the different tourist poles so that when the world returns to normality, it will find the country much more robust and better prepared to continue being a reference in the region.

“Undoubtedly the time has come for Jarabacoa, undoubtedly here is a new generation that is willing to build a better future for the Dominican Republic,” he said.

Meanwhile, the deputy of Jarabacoa, Rogelio Alfonso Genao, emphasized that a struggle of years has been concretized at last. This work marks a guideline and a grand alliance and commitment of the government with the community of Jarabacoa.

He affirmed that this road reconstruction is a leap in the quality of life of the entire community, a great encouragement to develop ecotourism activities that promote the region, and a promoter of job creation.

“With the inauguration of the first and second phases of the Belarmino Ramírez highway, it is a first step to boost the economic development of our area,” said the congressman.

Young people to be vaccinated.

After the activity, President Abinader answered questions from journalists.

When questioned about the measures to face the new variant of COVID-19, the president informed that the Pfizer vaccines had been contracted to reach a larger group of the population.

“As announced and confirmed by the Health Cabinet, we are going to vaccinate young people between 12 and 18 years old,” he explained. He insisted that the best thing the Dominican people can do is to get vaccinated.

Abinader cited the statements of Dr. Jose Joaquin Puello that 97% of the patients in Intensive Care are people who had not been vaccinated, and the remaining 3% came with comorbidities.

“The Dominican people have to get vaccinated. All those who are vaccinated are much safer in relation to the unvaccinared population,” emphasized the President.

He especially asked young people to get vaccinated.