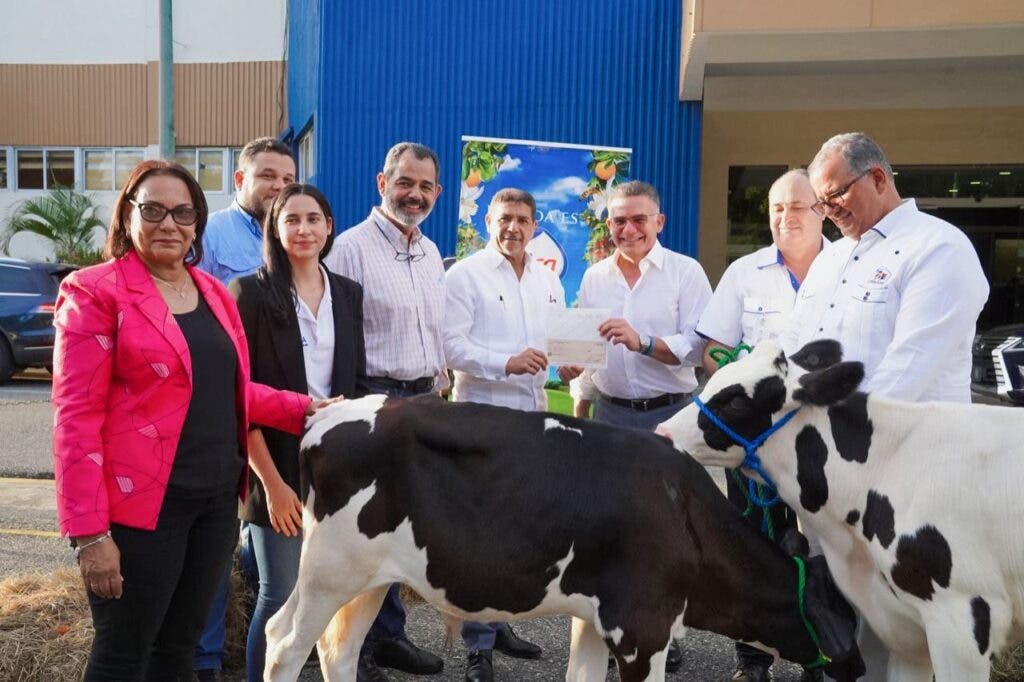 Pedro Brache delivers the 25 calves to Minister Cruz, together with other personalities.

Grupo Rica donated 25 Holstein calves to the Ministry of Agriculture to be delivered to the Center for Biotechnology and Animal Reproduction to improve the genetics of the national dairy cattle.

The donation was received by the Minister of Agriculture, Limber Cruz, from the president of Grupo Rica, Pedro Brache, who stated that the grant also includes financial support for the start of the repair of the sheds of the D1 Livestock Project ( Ysura), from Azua.

Minister Cruz thanked Grupo Rica, the oldest milk pasteurization company and owner of one of the most modern dairies in the Dominican Republic, for donating the 25 calves.

The official indicated that “these donations are part of the work being carried out by Agriculture to integrate private sector companies that have demonstrated success and efficiency in their production lines” in the country.

You can read Mi Lonchera Rica: The family’s comprehensive educational and nutritional proposal.

The donation ceremony was attended by the vice-president of Grupo Rica, Alfredo Ríos, and the director of Livestock, Geovanny Molina.

Also present was the executive director of the National Council for the Regulation and Promotion of the Dairy Industry (Conaleche), Miguel Laureano; the director of the Biotechnological Center for Animal Reproduction (Cebiora), Ayleen Rosario, and the coordinator of the Agricultural Regions, Abner Guzmán Mena.

It is recalled that the D1 Livestock Project is state-owned and is in charge of the Dominican Agrarian Institute (IAD).

More Holstein animals
To date, the most widely used dairy breed by Dominican Republic farmers has been the Holstein, but the Brown Swiss, Jersey, Simmental Lechera, and others have also been used.

In the case of beef, the most used European breed has been the Angus, but they have also been crossed with Charolais, Simmental de Carne, Normande, and other species, says the former director of Livestock, Marcelino Vargas, livestock farmer.