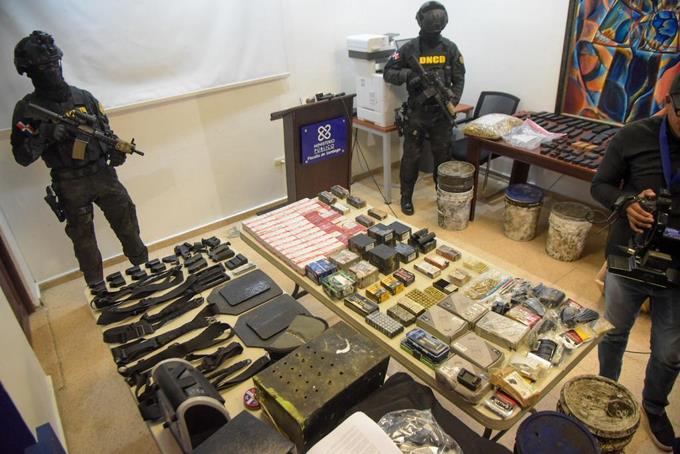 Weapons and accessories seized by the authorities.

Santo Domingo, DR.
An arms trafficking network was dismantled in Santiago through a combined operation of the National Drug Control Directorate (DNCD) and the Public Prosecutor’s Office.

This transnational investigation led to the arrest of two persons in raids, in which six rifles, two pistols, and 6,796 rounds of ammo, more than 4 million pesos, and more than 17,000 dollars were seized.

Ten prosecutors, headed by the head of the Santiago office, Osvaldo Bonilla, and agents of the DNCD’s Tactical Directorate of Sensitive Investigations (DITIS), participated in the operations of KAF.

The raids were carried out in Cristo Rey, in the National District; La Villa Olímpica, Los Frailes, in Santo Domingo, and in Licey al Medio, in Santiago.

The prosecutors raided the premises of the Quisqueya Shipping company, located on Marginal Las Americas street in Los Frailes.