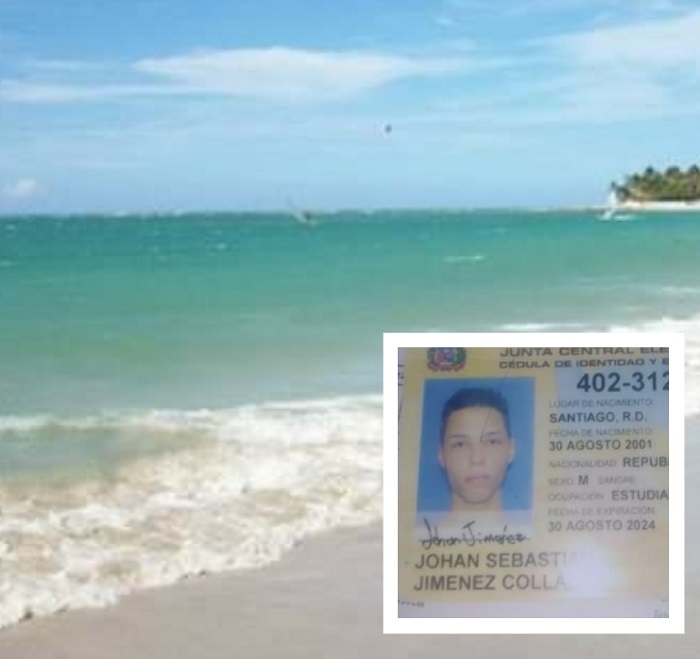 PUERTO PLATA.- The lifeless body of an 18-year-old student, who was missing for three days, was found by bathers in the early hours of Wednesday morning at Cabarete Beach.

The deceased is Johan Sebastián Jiménez Collado, who lived in the municipality of Tamboril in the province of Santiago. The young man disappeared last Sunday while attempting to swim in the moderately rough waters of the Atlantic Ocean.

It was reported that the body of Jiménez Collado was in an advanced state of decomposition when sighted today by bathers and people who exercised on the beach of Cabarete near the Hotel Punta Goleta.

Authorities of the Public Ministry and the National Police, accompanied by the acting legist doctor; Dr. Mario César López arrived on scene and after rigorous inspection of the body, sent it to the National Institute of Forensic Sciences (INACIF).

The young student Johan Sebastián Jiménez Collado arrived at Cabarete beach accompanied by friends and family on a tour on Sunday morning, but apparently he could not swim in the waves and was dragged by rough sea currents that left him drowning a short distance from his friends who were also in the water at the time.

From the moment of his disappearance, volunteers from the rescue agency Amber Rescue, units of the Navy of the Dominican Republic (ARD) and a helicopter from the Puerto Plata Air Base, began the search for the aforementioned young man.

It is always important to be warned that the waters of Cabarete beach can be rough and full of powerful currents including undertows whenever there are waves. Do not attempt to swim in these waters unless you are a skilled and powerful swimmer with a good knowledge of waves. And never swim alone.