Medina faces strong challenge to his predominance in the PLD 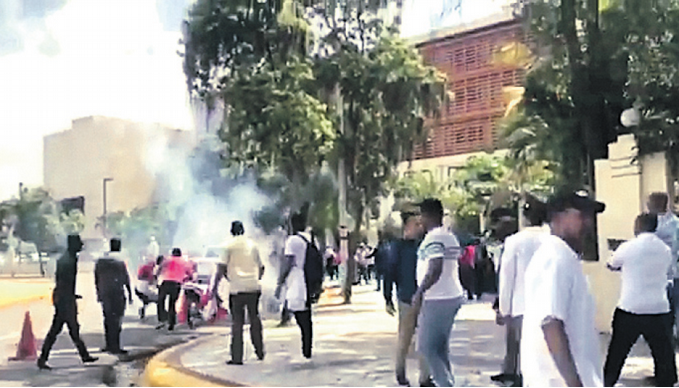 With his silence, which would be worth more than a thousand words, President Medina faces what seems to be the final chapter of the dissidence within the Dominican Liberation Party (PLD), which seeks to unseat him from power for the benefit of Dr. Leonel Fernandez.

Grabbing his parsimony, Medina did not dismiss Economy Minister José Isidoro Santana when he spoke out against his possible candidacy for the 2020 elections, nor the Minister without Portfolio, Bautista Rojas, who led a mob before Congress.

In a previous analysis, it was said that the problem between Medina and Fernandez who are fighting for power was a matter of life or death, but the last events of last week indicate that perhaps the disparity goes further if possible and will be decided soon.

The apparent mediation of party general secretary Reinaldo Pared Perez, who lasted long hours in separate meetings with the two politicians on Thursday, did not reach an agreement. The next meeting of the PLD political committee is scheduled for Monday.

Fernandez opened a seemingly unforgivable breach in the mood of President Medina and his inner circle when he suggested that the country, with the constitutional amendment and his re-election, would be directed to a dictatorship, a postulate that became a slogan.

Although the supporters of a constitutional amendment that would allow President Medina to run again in 2020, focus their demand to a single paragraph of the Constitution, Fernandez and his alarm have given the cause patriotic character.

The government may have caused bad taste that Dr. Fernandez authorized a group of more than 40 generals, admirals, and high-ranking officials to issue a manifesto in which they oppose the amendment of the Constitution, something unprecedented in the democratic era.

Some “wise” politicians attributed the militarization of the palace of the National Congress to complaints received by security agencies that an assault and occupation were planned, and as an anticipated response that the power is on guard.

Wall of accusations
President Medina has faced walls of accusations by traditional enemies and senior leaders of the PLD that accompany Fernandez, as happened a couple of years ago when the former president “judged” in the public square.

It was about pantomimes that took place throughout the country while the Green March made itself felt in large demonstrations that initially had the support of some businessmen and then continued with the encouragement of social networks and agitation and propaganda.

Dr. Fernandez ignored those activities in which he was tried and accused of the worst acts of corruption that had been committed in the country. Green March ceased its demands with the last manifesto of a radical sector that demanded the destitution of the government.

Later, the guns were turned against President Medina, encouraged by the denunciations of acts of corruption in the Odebrecht and other events that in one way or another were attributed to his regime.

But also at the instigation of Fernandez.

After the confrontation at the doors of the Congress to which the minister without Portfolio, Bautista Rojas, announced that he would take the next day to 20,000 people to “protect the Constitution,” the government maintained its silence, perhaps hoping that the consequences would fall on Fernandez.

With only one loss, the deputy Henry Merán, who was stifled by tear gas launched by police, the event reminded those who ordered the protection of Congress, the assault and burning of the building of the Parliament of Paraguay, in 2017.

For the police and military deployment put in place in the Dominican Congress, little happened if we take into consideration the media agitation and the many voices of alarm.

President Macron, in France, clenched his fist at the end of last year against the “yellow vests” that took to the streets due to the increase in diesel.

The Odebrecht issue
The issue of the Brazilian company resurfaced last Wednesday when the report with Alicia Ortega echoed an investigation by the International Consortium of Journalists in which it is stated that the Odebrecht company distributed 39 million in bribes to procure the construction of Punta Katherine.

The company would have carried out, always according to the Consortium, 630 secret payments in several countries and of these 118 were linked to the Dominican Republic and 62 to bribes for the construction of the Punta Catalina thermoelectric plant.

The report of the Consortium, published by the digital medium La Posta, of Ecuador, contains 13,000 archival documents stored in a secret digital platform known as “Drousys.” Most of the Dominican payments were made through the signatures of Ángel Rondón.

The businessman Rondón was sent to trial in the background last week by the judge of the Supreme Court of Justice, Francisco Ortega Polanco, along with five others implicated in the previous Odebrecht scandal, at a time when there was great disbelief about the suitability of the magistrate.

After the publication of the data of the Consortium, moderate voices were raised asking that the Attorney General of the Republic, Jean Alain Rodríguez, investigate the complaint, but others asking President Medina for his dismissal.

All the hubbub of politics, corruption and the mysterious death of several American tourists who have stayed at resorts, occurs at a time when the Dominican Republic is threatened by cancellations of tourist packages contracted for the rest of the year and when some airlines are offering solutions to customers who have canceled trips.

The meeting of a group of businessmen from the tourism sector and other areas in the National Palace with President Medina seemed more than a courtesy to return the recent reception to the president in one of his establishments, a way to discuss what could be a serious situation and perhaps give support to the ruler.

Opponents to Medina, focused solely on how to oust the ruler from power, apparently have ignored the serious problem that could represent for companies that have invested in tourism enclaves and the impact on foreign exchange income and employment.