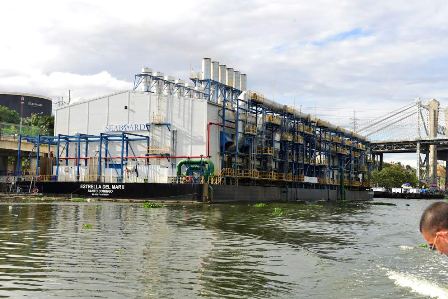 Santo Domingo.- The Environment Ministry on Monday said it suspended the renewal of environmental permit to the company Seaboard/ Transcontinental Capital Corporation and ordered it to remove its power plant-barge moored on the Ozama river.

Environment said the company should move the barge elsewhere with less contamination and pollution.

“The Ministry will offer all the facilities, but they cannot stay in the rivers,” Environment said in a press release. “The plant must be relocated within six calendar months, after the expiration date of its license, which is March 21, 2018.”

It adds that despite that the Estrella del Norte power plant operates with natural gas, “it is equally true that 5% of its fuel is diesel, which represents a potential risk of contamination by hydrocarbons during the transfer of fuel and lubricating oils in the routine operations.”