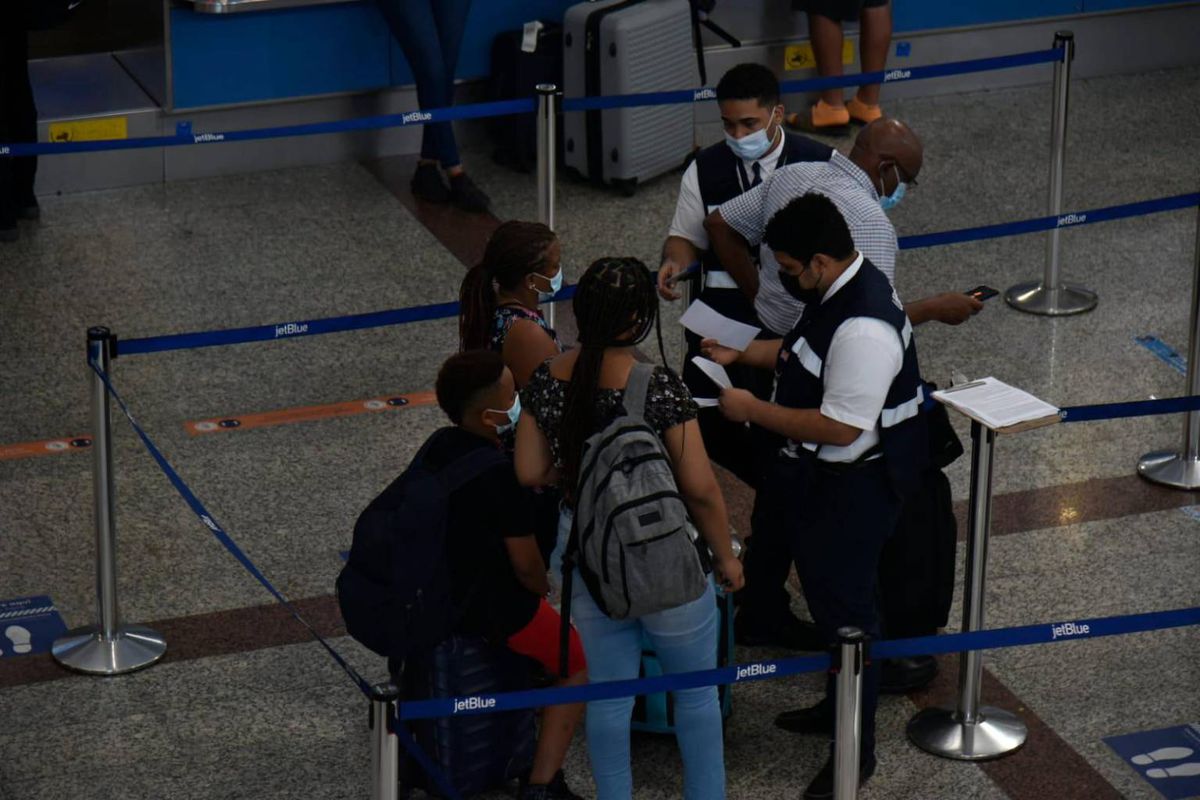 THAT IS MANDATORY TO LEAVE AND ENTER THE COUNTRY

There was anger, pressure, haste, and tranquility among Las Americas International Airport (AILA). Everything depended on how each one had been filling out the electronic immigration form or e-Ticket that came into force last Wednesday, September 1, and is mandatorily required to leave and enter the country.

“It’s not difficult, but the platform has many situations that must be corrected,” said Paola Guerrero, one of the “affected” in the terminal.

Guerrero estimated that it took an hour to fill out on his cell phone the form whose mobile version did not allow him to go directly to the year of his birth.

“Change that method, it’s useless! That’s crap that damages the country more than it is!” one lady shouted at the airport staff, angry that she missed her flight after having difficulty filling out the e-Ticket. A Chilean passenger, seeking assistance, also feared that his plane would leave him.

Although since January of this year, the options of filling out the e-Ticket or doing it by hand on paper (as was allowed until yesterday) coexisted. Today, the digital format was established in a mandatory way, and the traditional one was suppressed.

Although at the Las Americas airport, the second with the highest flow of passengers in the country, there was pressure for the filling of the e-Ticket, flights until noon had not suffered delays, said Luis José López, spokesman for Aeropuertos Dominicanos Siglo XXI(Aerodom), administrator of the terminal.

He said travelers arriving in the country are being asked to fill out before boarding their flight, with support from the airline.

AILA arranged for customer service personnel to assist passengers until the use of the system is normalized.

However, visitors continue to express their dissatisfaction with the new process: “I lost three tickets, there is my wife and daughter, who stayed here stranded (in AILA), and I do not know how we are going to do it. We talked to Delta (Air Lines), but we have to buy another flight to be able to leave on Saturday, which is that there is availability,” said a man.

According to local media, some passengers complained about the slowness in the process and the fall of the platform, which has made it difficult for them to fill out the form on time.

“It’s impossible to fill out the document to get out. Two days, and we haven’t achieved anything, we are here (at AILA) to see if they help us or see what we do with it,” said one traveler.

Also, opinions for and against has generated among passengers of the Cibao International Airport the change from the physical form to the electronic one for the declaration of travelers before the offices of the DGM and the DGA.

According to passengers consulted by Diario Libre in this air terminal, the process to fill out the ticket on the digital platform is very long and complicated for people who do not master technology.

“It took me about ten minutes to fill it with my daughter. However, I understand that they must simplify the process so that we analogues can do the process without help,” said Juan Acosta.

Another passenger who identified himself as Martín Castro said that it is a platform “complicated for us who do not have much knowledge of technology.”

While Juana Reyes, a passenger who was on her way from Santiago to New York City, applauded the implementation of the system.

“That paperwork was uncomfortable for you to have to fill it out in the middle of a flight,” Reyes said.

Lorenzo Vargas, the coordinator of the Migration Services at the Cibao International Airport, reported that the institution has several inspectors to assist people who require help filling out the form.

“We have a staff, properly trained, to help any passenger who requests it,” the official said.

He said he understood the complaints of some travelers that it was a new system.

With this resolution’s entry into force today, people who do not submit the previously filled form through the Migration page will not be allowed to make their trip.

We travel to DR 4-5 times a year. We have been using the e-ticket since last year. Agree it is cumbersome on mobile phones, but on a computer, it is quite simple. If you plan ahead and do it the day before you leave or arrive, it is much easier than the paper forms. But if people wait to the last minute, like many travelers, good luck. Just like packing your luggage, plan a little and process will be seamless.

Your comments are mine. People look for problems and someone to blame for their own ineptness.

everything that doesnt work is hpeles. Arriving to RD i coud not enter the year of birdth…There is no city of Veron on the list…so the info is fake…i did get the code anyway typing false info. Just wonder what will happen when i leave. But…after all this is RD…Why should things work….j*

There are many comments about the new form since early 2021 when the form was “supposed” to go-live but couldn’t due to all the problems. The issue isn’t the idea (in general, most say it’s a good idea), the issue is in execution. The government did a poor job selecting the company that developed the form. The DR forums & chat rooms as well as Travel Agency websites here in the States have hundreds of traveler experiences using the form over the past 6 months. It works for some, not for others. Works with some browsers, not others. Certain fields don’t display properly or form controls, like drop downs, calendar selectors etc. just don’t work across all systems. Works for some on mobile only but not on their laptops, etc. Certain languages display properly, others don’t etc. The form and process are just very inconsistent.

In short, the programming job was very, very poor, there was very little quality control or testing with the result being a system that’s not workable even close to 100% of the time. I live in NY and have travelled to SD twice in the last few months and both times it took over an hour to do the form (due to all the re-tries or items that inexplicably didn’t work on one browser, computer, phone etc.)

In addition, when it was announced the government said travelers could fill out the form at the airport and use the airport wifi for access since international arrivals don’t have RD SIMs but depending on the airport, it either never happened or, like at Las Americas, it became so oversubscribed that public internet is unusable. Just another example of poor planning, poor execution.

I’m holding off travelling back again until it either (a) gets fixed or (b) just like the other two “mandated starts” earlier this year that were put on hold due to all the problems, they actually fix the system so it works for everyone. Right now, as other posts show, it works for some (which is good), but there are still too many others it’s not working for to be worth the risk of being denied entry/exit and losing an expensive flight because of it.

The Form Needs To be improved. You should not lose what you put in. You need an A1 person to Reset or better Program the System. Very unprofessional programming.
It should flow. The system has alot of Flaws. Help people not hurt them.