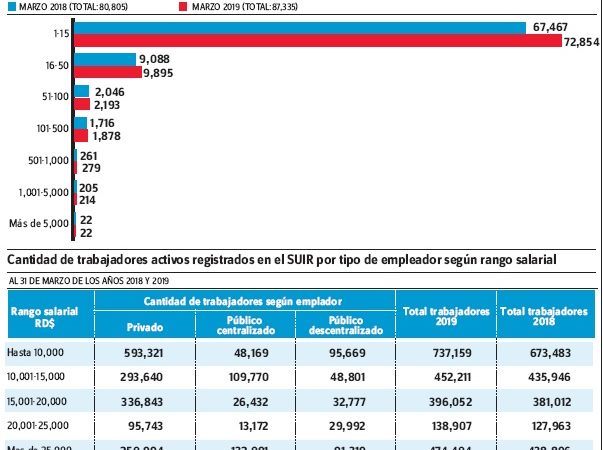 Labor Day, which is officially celebrated on May 1, finds the Dominican working-class immersed in two vital discussions: the reform of the Labor Code and the increase in the minimum wage that prevails in the country.

In both cases, the negotiations between the employers’ sector and the trade unions are stalled on such vital issues as the intention to eliminate unemployment and the cap that employers say they can reach to raise minimum non-sectorized wages, which should be reviewed every two years.

The wage increase is a constant demand of the union sectors, taking into account that the current salaries do not correspond to the high cost of the basic family budget.

In fact, the Central Bank governor, Hector Valdez Albizu, has repeatedly stated that only with improvements in the salaries of lower-income workers will the sustained economic growth of the Dominican Republic be felt in broad sectors of the population. The last six years has been 6% of GDP.

To these two challenges is added the necessary reform of the Social Security System, which is also required by trade union groups, both in terms of access to health and pensions.

Attentive and firm unions. The trade unionist Rafael Abreu, president of the National Confederation of Trade Union Unity (CNUS), considered as a great challenge for the working class the counter-reform to the Labor Code to which the business sector aspires.

“Luckily the Government withdrew the proposal of unemployment, employers are those who are still pending the issue, but we hope there will be no change in unemployment because the Dominican worker does not conceive another form of payment.”

Abreu said that the working class also expects a deep modification to Social Security, in terms of health, labor risks and pensions.

The union leader announced that next Wednesday, May 1st, the unions will carry out a large march that will start at 10:00 in the morning from the Business Tower to the National Congress, to raise their voice on the rights of Dominican workers.

Likewise, Abreu said that on Thursday, two unions will be on the stage of the National Wages Committee, discussing with employers the revision of minimum wages.

Abreu said, in relation to the issue, that so far employers have not made a proposal on the increase in salaries.
In this context, he stressed that the position of the unions is that without a 30% increase there will be no business classification.