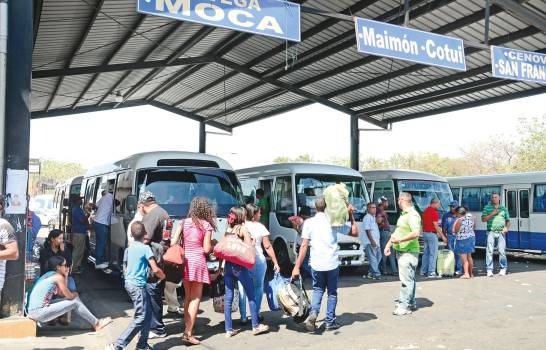 In the main bus stops the dramatically increased flow of people traveling during Holy Week is already being seen.

In addition to the religious activities, during the holiday of Holy Week, an economic impact of billions of pesos is generated in the Dominican Republic, which is comparable to seasons of great commercial activity such as Christmas, Black Friday, the Mothers and the return to school.

An example of the large amount of money that circulates during Easter is that the hotel occupancy is over 95% in the East and nationally hotels are experiencing occupation rates of more than 85%, said the vice president of the National Association of Hotels and Restaurants (Asonahores), Andrés Marranzini.

But also commercial activities are greatly revitalized during this period, which is famous for the traditions, beans with sweet and jaunts to beaches and spas of the country, which means that citizens stock up on food and buy clothing for the occasion.

In March last year, the month in which Holy Week was commemorated, the General Directorate of Internal Taxes recorded sales of taxpayers for an amount of RD $ 118,046.6 million.

As far as tourism is concerned, in the Dominican Republic, there are some 80,000 hotel rooms, an average of 2.5 people per room and a daily expenditure of foreigners of about US $ 136, according to the Central Bank.

According to the data, in the country, there are some 68,000 occupied hotel rooms, which would have some 170,000 people and an estimated cost of about US $ 161 million is expected in the seven days of Holy Week.

Also, during the Semana Mayor, the increase of activity in the transportation and consumption of fuels is remarkable. Already the Emergency Operations Center (COE) estimated that four million people are expected to travel, which means 40% of the Dominican population.

And the leader of the National Organization of Commercial Enterprises (ONEC), José Luis Magadán, indicated that for these times the shopping of food and seasonal clothing increases greatly.

The amount
136 Dollars is the average expenditure per night of foreign tourists in the Dominican Republic during Easter.