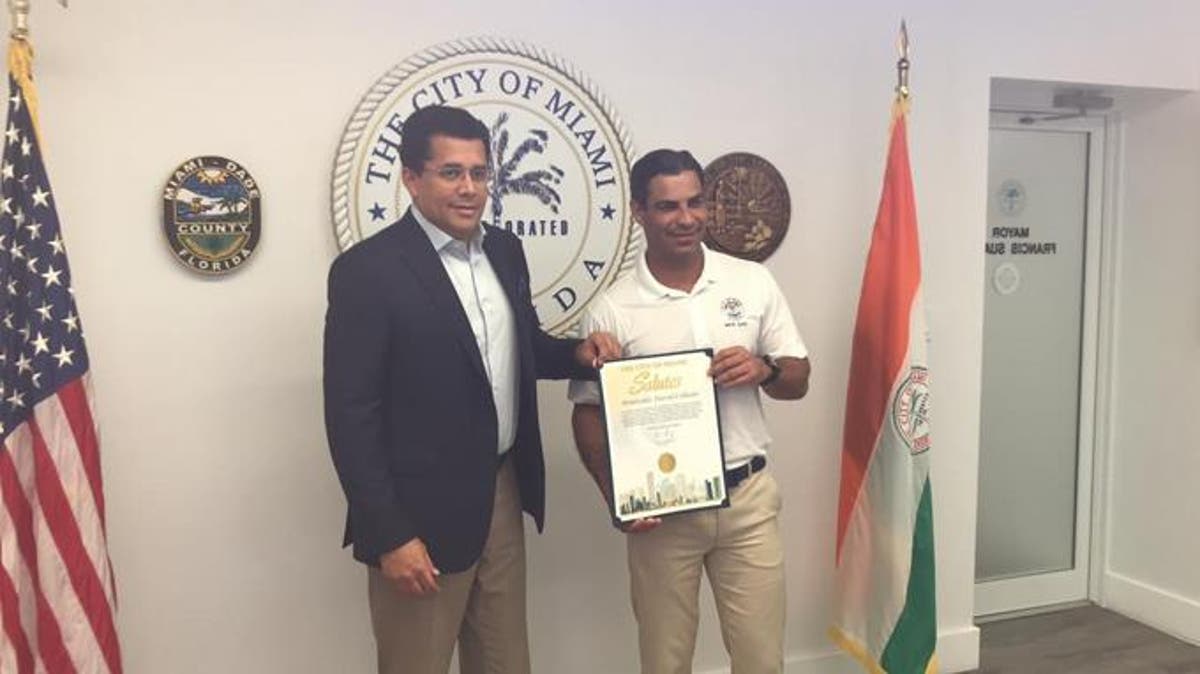 The Minister of Tourism, David Collado, together with the Mayor of Miami, Francis Suárez, upon receiving recognition.

According to Collado, Miami is an example of growth in technology, entrepreneurship, and tourism

The Minister of Tourism, David Collado, held on Thursday a meeting with the mayor of Miami (United States), Francis Suárez, to strengthen ties of friendship and address, among other aspects, how tourism is managed in Miami and the Dominican Republic.

“Far from being Minister of Tourism, I am convinced that I must be an ambassador and knock on doors in all cities that are origin sources of tourists to the Dominican Republic, always thinking of the 500 thousand Dominicans who live and work in this sector in our country,” Collado said before starting the meeting.

Likewise, the Minister of Tourism and Mayor Suárez talked about tourism in the Dominican Republic during the pandemic, its progress, and current health protocols, such as the success of the National Vaccination Plan.

According to Collado, the city of Miami receives more than 500,000 tourists a year. It is an example of growth in technology, entrepreneurship, and tourism and becoming a financial center, so he discussed with Suárez the techniques applied in the city he manages.

This meeting is a prelude to the conference that will take place this Thursday afternoon together with tour operators and travel agencies from the so-called “city of the sun” to present the Dominican tourism offer and the country’s progress in its fight against the pandemic.

During the day, the mayor presented Collado with an acknowledgment while expressing the mayor of Miami’s appreciation for the Dominican Republic.

“We have a very special space in our hearts for him, and we have given all the formal tributes that we have at our disposal (…) the Miami community is closely related to the Dominican Republic and for me, being someone who has visited on several occasions, it is very special to be able to receive it,” said Suarez after presenting the award.

At one point, Suarez also claimed to be a fan of the Dominican Republic.

This time, the mayor recognized David Collado as a distinguished visitor to Miami, but this is not the first time he has been honored.

In 2017, when Collado was mayor of the National District, he received the keys to Miami from the former mayor, Tomás Regalado.

During that meeting, a series of joint works was agreed to resume the benefits of a resolution approved by the chapter house that united the cities of Miami and Santo Domingo.