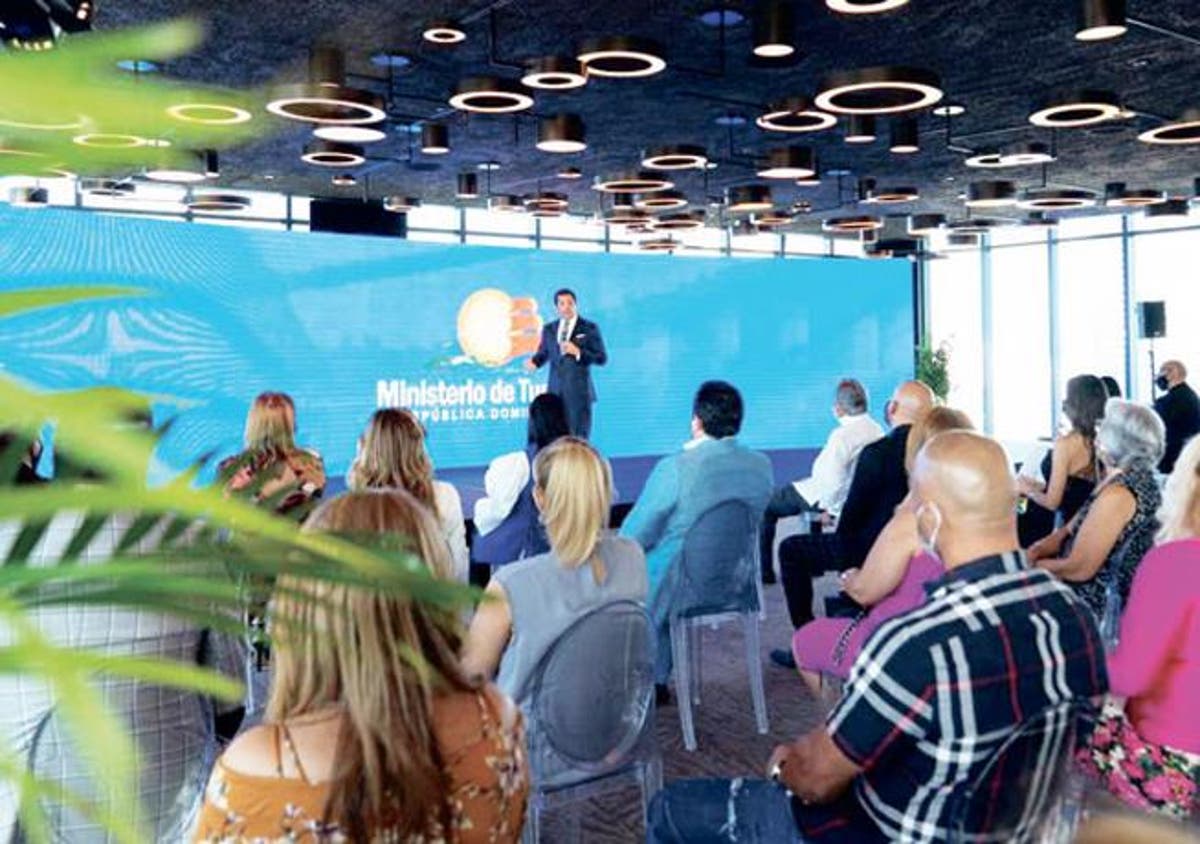 The country’s primary economic sector, tourism, was one of the most affected since the beginning of the Covid-19 pandemic; however, a little more than a year later, when some of the first impacted countries continue to have restrictions on their borders, the Dominican Republic “is prepared to receive tourists.”

This was stated by the Minister of Tourism, David Collado, during a meeting last Thursday with more than 100 travel agents, tour operators, airline representatives, and investors of the hotel sector in the city of Miami (Florida, United States) in which he presented the achievements reached despite the sanitary crisis and new initiatives.

The modernization of the beaches with Wi-Fi access and installing closed-circuit security cameras, and eliminating taxes on domestic flights were some of the future measures announced to those present.

After a pleasant presentation in which the initiatives applied in the sector during the pandemic were shown, Collado took a few minutes to listen to the opinions and considerations of the travel agents. Flight taxes was a common factor among the comments and have already been discussed with President Luis Abinader.

“The President of the Republic just authorized me two or three weeks ago to remove the tax on internal flights and this is going to energize Barahona, it is going to energize the South,” Collado responded to Ramona Sterling, a travel agent, lamenting that her hometown of Barahona has been forgotten despite its attractions.

The measure seeks that through these flights, people going to the Eastern region can visit other destinations for several days and the rest of the hotels and cities of the country will receive a greater flow of foreign tourists.

Rosario Pacello, manager of Skyway Travel, said that the authorities should also take into consideration the high taxes applied to international travel and the high cost of the airport since this was the argument of the Brazilian airline Gol, used heavily by its clients when they withdrew approximately two years ago from the Dominican market.

Cruises
As a consequence of the restrictions in the city of Miami, many cruise lines are choosing the Dominican Republic as a base center, for which Pacello also requested to facilitate to the shipping lines the establishment of their headquarters in Dominican ports.

In view of this, the minister indicated that they are supporting them and looking for “any discount in fiscal matters” so that they establish themselves in the country, at least while the pandemic continues. Likewise, the Minister of Tourism informed that last Thursday, he met with the Norwegian cruise line executives and signed an agreement to have its home port in La Romana. They are also closing other contracts with Royal Caribbean and another cruise line.

Modern beaches
Another of the announcements made by Collado during his presentations at the event was the uprooting of the country’s most popular beaches.

“In the next few days we are going to announce that all the most used beaches in the Dominican Republic are going to have free internet, closed circuit security cameras and we are going to spruce up all the beaches, we are going to recover the beach spaces, so that tourists feel safe when they go to the DR,” said the minister.

According to the minister, Guayacanes, Cabarete, Las Galeras and Boca Chica will be refurbished next week.

Meeting
Collado decided to change the form of communication with the tour operators of Florida, where 10% of the tourists who come to the Dominican Republic come from, so he held a meeting with them last Thursday in the city of Miami.

The minister, who considers himself an ambassador of the country, emphasized during the meeting that he is not interested in being a partner of the invited businessmen and executives, but in developing joint strategies and working as a team for more outstanding promotion of Dominican tourism.

Gibrán Chapur, an investor of Mexican origin, considered that this first forum gives security to the clients and encourages the confidence of tourists in the country and in traveling.

Rosario Pacello, who attended on behalf of Orlando, was surprised by how the country “has advanced so much in recent months in a scenario that was not favorable to anyone, such as the pandemic.”

Achievements
In the last eight months, the Dominican Republic, described by Collado as a paradise of good people, has been recognized by the World Tourism Organization (UNWTO), the World Travel and Tourism Council (WTTC), Expedia, and Forward Keys for its performance, “placing the country as an example in tourism management during a pandemic.”

There were 11,000 employees in the tourism, hotel, bars, and restaurants sector vaccinated.

Among the initiatives adopted by the Dominican government to alleviate the effects of the pandemic in this sector are the creation of the Tourism Cabinet, the launching of the Travelers Insurance with Banreservas and the free access to Covid-19 tests for American tourists, among others.

They also focused on regaining the confidence of investors and hotel owners.

Gibrán Chapur, executive vice president of Palace Resorts, has investments in the Caribbean half-island, one of which is the construction of the Moon Palace Punta Cana.

“After seeing what the Dominican Republic has done, I have firmly decided to continue,” Chapur told Listín Diario. Next week they begin the most substantial of the projects, a 17-story hotel.

Collado attributed the success of the strategies applied to the union and effort of diverse sectors, “leaving aside political, personal and partisan interests and putting on the table the interests of the DR, recognizing that tourism is the main industry of our country.”