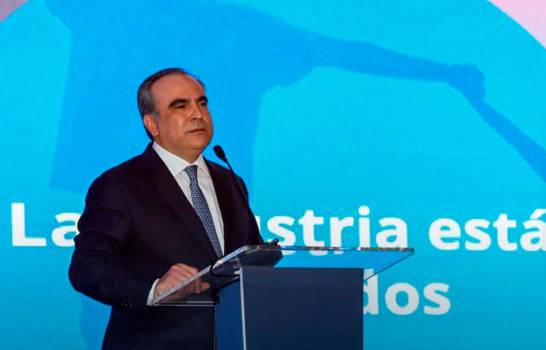 The president of the Association of Industries of the Dominican Republic (AIRD), Celso Juan Marranzini. (EXTERNAL SOURCE)

The President of the Association of Industries of the Dominican Republic (AIRD), Celso Juan Marranzini, announced this Wednesday that 64 industries in the sector will invest more than 79 billion pesos in 2022.

In an act led by the President of the Republic, Luis Abinader, Marranzini said that it is estimated that the announced investment will generate more than 78,900 new productive jobs.

“As a result of the levels of certainty achieved and the firm decision of our partners in favor of the reindustrialization of the country, we can today announce that, thanks to information collected in just 64 industries in the sector, it is projected that during the year 2022 they will make investments more than 79 billion Dominican pesos,” emphasized the AIRD executive.

He explained that the investments would strengthen the production of non-alcoholic beverages, cement, lime, and plaster; manufacture of food products; exploitation of mines and quarries; manufacture of iron and steel products.

“These investments, friends, are equivalent to 1.3% of our GDP,” he pointed out.

The data were offered in the framework of industrial activity, where the recognition with the posthumous Industrial Merit award was announced to the industrialists Eduardo Ramón Martínez Lima and Antonio Nejri Acra (Don Papia).

The award for institutional work to support the Industrial sector was also presented to the Ministry of Industry, Commerce, and MSMEs, and the national award to the Dominican industry was given to Grupo Rica.

The activity was held at the Hotel Embajador and was attended by President Luis Abinader; the President of the Senate, Eduardo Estrella; the Minister of Industry, Commerce, and MSMEs, Víctor Bisonó, as well as other ministers and representatives of different government institutions, companies, and business organizations.