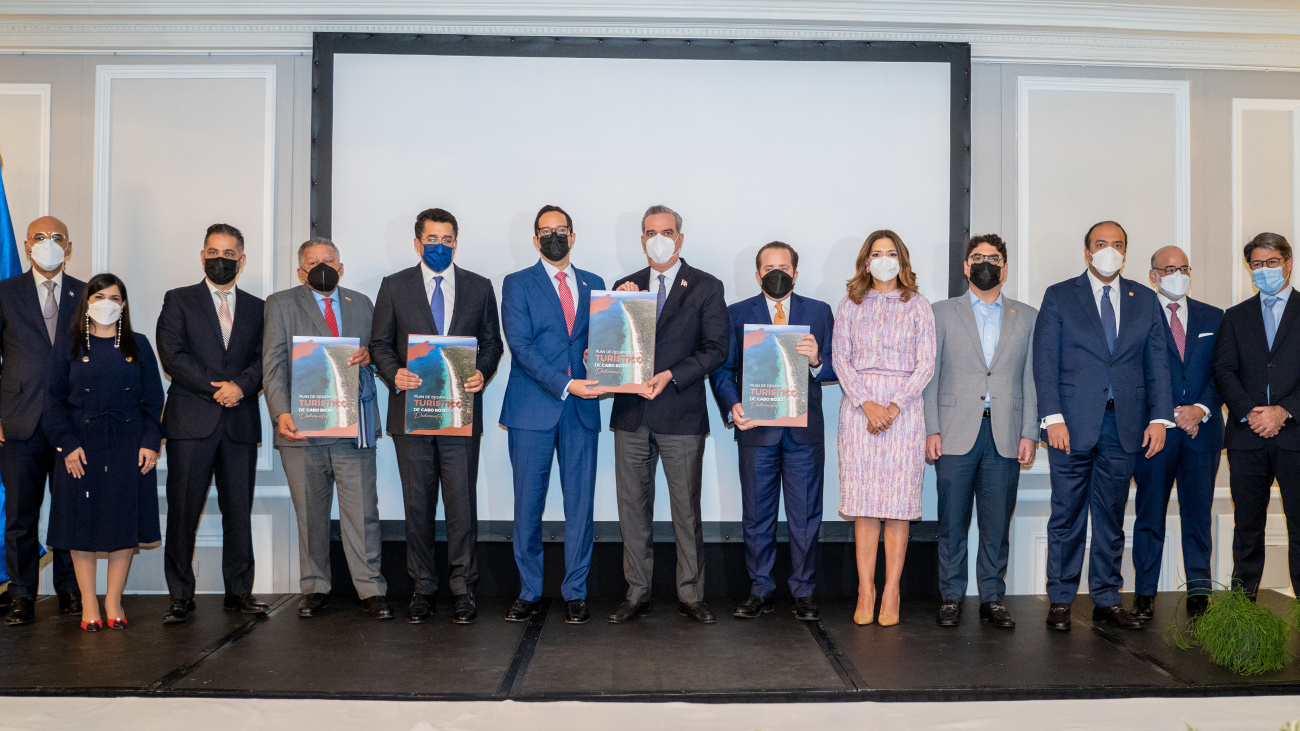 Madrid.– President Luis Abinader revealed in Fitur 2022 that the Pedernales Tourism Development Project (southwest), one of the most important commitments of his government, will be carried out in four phases; the first will start with 6 hotel chains, for a total average period of 10 years, and with an estimated investment of 2,245 million dollars.

According to Presidencia.gob.do, he said that in the first phase an investment of 1,300 million dollars is foreseen for the construction of 4,700 rooms, which will become 12,000 rooms at the end of the project.

He stressed that the development of this new and spectacular tourist destination will create nearly 20,000 direct jobs and more than 50,000 indirect jobs, which translates into economic dynamism in the region.

The head of satate pointed out that six hotels will begin operations during the opening of the first phase, for which hotel chains Hilton, Marriott, Sunwing, AmResorts, Iberostar Group and Karisma Hotels & Resorts have already signed a letter of commitment to begin construction of their hotels from the middle of this year.

President Abinader spoke during the presentation of the Tourism Development Master Plan for Pedernales, which begins in Cabo Rojo and will make the change towards a prosperous future in this post-pandemic era as an irreversible reality.

“Our vision of the future of the Dominican Republic is shared, since we want to guarantee a country with remarkable economic growth, with decent jobs and a fair redistribution of our wealth, which reaches the vast majority of Dominican households, families and to every citizen,” he expressed.

He stated that this project will radically transform the lives of thousands of people in the Pedernales province and throughout the southern region of the country.

“Cabo Rojo-Pedernales will be the first tourist destination in the Caribbean to be developed from scratch under a public-private partnership, with a luxury offer based on sustainable tourism, taking care of every detail to offer tourists the best experience,” he said.

He assured that this is one of the most ambitious projects, one of the most demanded and necessary, which is becoming possible thanks to the involvement of many people and institutions who believe in the solidity of the country, in the opportunities that are opening up and in the future that awaits them and that they are building together.

“The Dominican moment has arrived. Invest in it. You will not regret it,” Abinader concluded.

Full disclosure… I’m not Dominican, I’m an American living in the USA (married to a Dominican) so it’s not my land or my future but to me, this project seems like the beginning of the end of one of the last, most beautiful, pristine areas of the DR.

I went to Bahia de Las Aguilas for the first time two years ago and it is absolutely stunning. The clarity and stillness of the water, the landscapes you drive through getting there, the authenticity of the towns and the people – it’s incredible. It’s truly untapped beauty. I understand completely the want to bring new job opportunities to the Pedernales region but once you get thousands of tourists coming in and out on a daily basis it won’t be long before the beautiful water and beach have a constant film of suntan oil on it, that crystal clear water is cloudy with suspended sand and dirt through the unending churn of feet shuffling through and the flora and fauna along the shore gone from the trampling of feet.

And even though it’s SAID it won’t encroach on the National Park, make no mistake there’s no guarantee that future governments will see it that way. I don’t care if you’re talking the DR, the US or any other country in the world, it’s happened time and time again – it just takes one Act of a legislature to change a law, a boundary or even a National Park when it’s determined it’s in the ‘best interests’ of the State. And those whose hands are on the levers of power to make those changes will not be the ones living there who suffer the consequences.

And even though this is being billed as a “Cabo Rojo-Pedernales” project, also make no mistake, it’s about Bahia de Las Aguilas. While the red mining beach of Cabo Rojo is interesting, it’s not something that would attract legions of tourists. If Bahia de Las Aguilas didn’t exist, this project wouldn’t even be considered. This means that Bahia dLA will be the star attraction with shuttles, boat rides, tours etc. going to the beach through the National Park constantly.

Once the beach ceases to be pristine, tourism then dies and since the South as a whole is a long way from the rest of the major population or vacation centers the jobs that were created are lost, hotels close, decay sets in etc. and all that’s left in 20 years is a shell of its former self.

I/M/O there’s nothing sustainable about this type of tourism.

the project will not be built in Bahia de las aguilas but in Cabo Rojo.

Yes, the project is in Cabo Rojo but the whole project is and has always been the pristine beach at BdLA. BdLA is the star attraction and once there’s non-stop transit in/out of the park – thousands of tourists per day – it’s pristine state eventually goes away. Once that’s gone, will people really travel all the way to the deep South to see Cabo Rojo? Just my $.02. Either way, I hope it works out positively for the residents in the area.

In 20/30 years time mass tourism of the type envisaged here will have had its day. Clearly communities in Perdendales need support and development but not at the expense of destroying what makes it so special. Once the big developers move in and the hotels, golf courses and support facilities built (12,0000 rooms envisaged) there will be no going back and the landscape will have been destroyed. More thought needs to be given to the long term future of this area and the need to preserve areas such as Bahia de Las Aguilas.