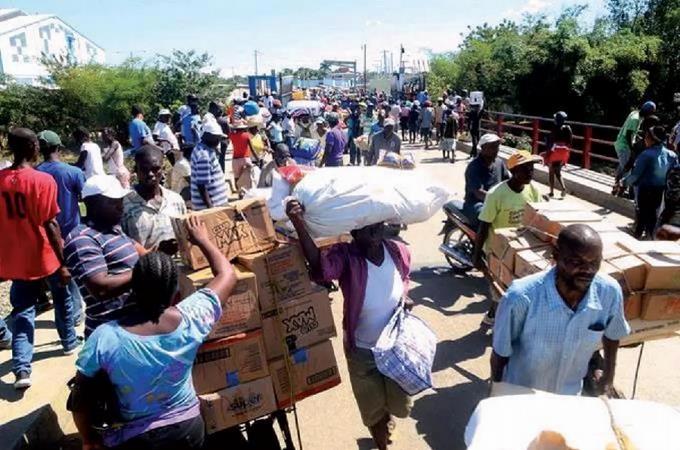 Santo Domingo, DR
Exports to neighboring Haiti continue to occupy a second place as a destination for Dominican sales, whose exchange remains very much in favor of Dominicans because that country imports 97.64% of the goods it needs and barely trades 2.4% as exported goods to this part.

According to official data, between 2015 and January and July 2022, Haiti bought Dominican goods for more than US$6,899.2 million, equivalent to 97.6% of the commercial exchange with the Dominican Republic.

The products that Haiti has formally purchased are mainly cotton fabrics, portland cement, wheat flour, soybean oil, plates, sheets, sheets and strips of non-cellular polymers of ethylene, sweet cookies, paper or cardboard boxes or corrugated cardboard, plastic tableware, and other items for table or kitchen use.

Other products occupy more than half of the purchases (54.1%), so it is inferred that they correspond to basic foodstuffs.

A ProDominicana report indicates that in the first seven months of this year, Haiti purchased goods from the Dominican Republic valued at more than US$678.2 million, while the imported value was US$674.2 million.

An analytical report by the consulting firm DASA, prepared for the Dominican Association of Exporters (Adoexpo), indicates that in the first half of this year, 2022, exports to Haiti grew 30.6%, equivalent to a value of US$680 million.

According to to report 36 of the Haiti Studies Unit of the Center for Studies, Economic and Social of the PUCMM, “from 2019 to January-June of the current 2022, the trade accounts of goods of the Dominican Republic with the Republic of Haiti accumulated a surplus of US$3,101 million.”

The country has no public data on significant investments in the Haitian capital. However, in recent years there has been an exodus to the DR due to the neighboring territory’s social, economic, and political instability.

Its a failed state, they dont produce nothing, except extreme poverty and gang violence

Activities were completely paralyzed in the metropolitan area and in several departments of the country on September 13, 2022. Very early on Tuesday, streets were completely barricaded. Trade, public transport were at a standstill. The doors of public administration institutions, banks, supermarkets and transfer houses remained closed. It was difficult even for pedestrians to get from one point to another during the day on Tuesday.
In Delmas 17, protesters tried to take over the premises of the National Old Age Insurance Office (ONA). According to a witness, individuals fired and threw stones at the institution. In response, security guards fired deterrent shots. “One death was recorded during these scuffles. And we accuse the security agents of being responsible for this death, ”explained a source to the newspaper. Police officers were dispatched to prevent the protesters from invading the premises of the institution.
In Pétion-Ville, where hundreds of demonstrators took to the streets, the premises of several institutions were attacked. This is the case of the Model FM radio station, located at Rebecca Street. “During the mobilization day in the capital on Tuesday, unidentified individuals attacked our premises. One of our employees came out injured. Our building and other materials are damaged. We demand the support of the police,” reads a post from the radio on Facebook, accompanied by several shots of bay windows and other broken equipment. Unidentified individuals also attacked other businesses in Pétion-Ville and Delmas, sometimes attempting to loot them. Embassies closed until further notice
The French Embassy, ​​located near the Champ de Mars, has issued security instructions to its nationals and announced its closure until further notice. “To the French living in Haiti: deterioration of the situation (clashes and roadblocks) in Port-au-Prince and in the provinces. The Embassy recommends: limiting your travels to what is strictly necessary; be very careful when traveling; provide a stock of basic necessities at home. These events lead us to close the services of the Embassy to the public as of now and until further notice”, can we read in the notice published by the Embassy of France.
At the end of the afternoon, the Spanish embassy also announced its closure for Wednesday, September 14. “Due to the events in Port-Au-Prince, we are forced to close the services of the Embassy of Spain to the public this Wednesday, September 14. We apologize for this inconvenience”, can we read on the Twitter account of the embassy.
Started several weeks ago, the demonstrations increased in magnitude on Monday to protest against Prime Minister Ariel Henry’s announcement to revise upwards the price of fuels (black market items), which are sold much more on the informal market. During an address to the nation, the head of government revealed that the state has spent more than 50 billion gourdes to subsidize these products. According to his explanations, the end of the subsidy will guarantee the availability of fuel in all stations and a return to normal market conditions which, for at least two months, have tended to break down.

The gangs need to turn the border into a war zone to stop dominican goods.

That would lead millions of Haitians to starve and be deprived of essential goods and products. Why in the world would they do that?