In 2021, foreign investment in the Dominican Republic reached US$3,102.1 million 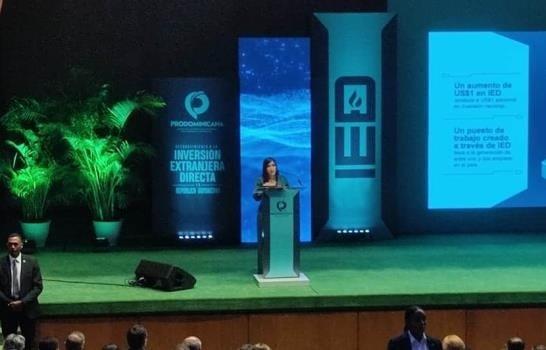 Biviana Riveiro, director of ProDominicana during the activity. ( FREE DAILY )

In 2021, the year in which the Dominican Republic recovered from the injuries caused by the pandemic in 2020, Foreign Direct Investment (FDI) reached US$3,102.1 million, equivalent to a growth of 21% compared to the previous period.

And if the broader period of the last ten years is considered, FDI reached US$27,000 million, which is the highest figure in the Caribbean region and places the Dominican Republic among the 10 Latin American countries with more foreign investment.

In general, all these corporations contribute around 200,000 direct jobs.

They are entities from 57 nations that, for decades, have promoted economic and social transformations, as well as the productive development of the country, according to Raquel Peña, Vice President of the Republic, who spoke at the event.

Peña indicated that these numbers are not by chance but of a Government effort focused on strengthening the justice system, legal security, and the outward display of a transparent system in the administration of public funds.

The activity was attended by several ministers of the economic sector and dozens of foreign businessmen.

The cheap labour in the DR is an encouragement to companies who may have factories in China but wish to relocate. Unfortunately some companies have moved to other Latin countries and have found out the hard way that latino workers are not like chinese workers and quality control is an issue . Still , the expansion of various factories and warehouses and laboratories in west and north Santo Domingo has been very good.