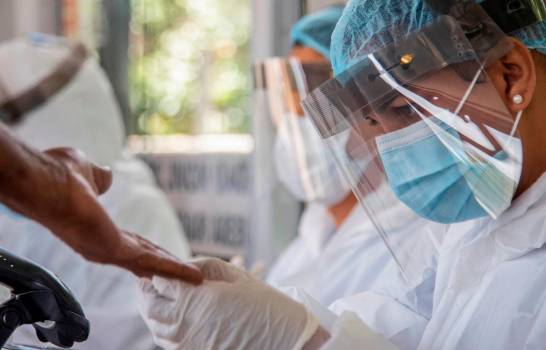 Laboratory personnel carry out coronavirus tests in the Dominican Republic.

The Minister of Public Health affirms that there is “a fall” in the positive cases of COVID-19 in the Dominican Republic, despite the economic opening that has been arranged and that next Wednesday will have been 15 days.

Rafael Sánchez Cárdenas cited the case of Santiago that today reports nine positive for coronaviruses when in bulletins last week they were 18, 19 and 12, and the figures earlier were much higher than the latter.

“So what we are looking at in Santiago is also a drop in the number of cases that are being reported in the country and with everything that they are pointing out … We are experiencing a decrease in cases despite the fact that we are opening the economy,” said the official.

He attributes this to the fact that the measures implemented by the Government “are being effective” and that most people are abiding by them, especially when it comes to the use of masks.

He also cited that with the opening of the companies “there is no substantial variation” in the hospitalization of patients as a result of the virus.

“So this is a good indicator in this regard,” he says.

However, Sánchez Cárdenas indicated that there are other indicators that will be evaluated next Wednesday when the 15 days of the reopening are completed.

In bulletin number 74, which was released today, the Minister of Public Health reported 287 new confirmed cases of COVID-19, for a total of 17,572. No deaths were reported today, which total 502 due to the coronavirus that has been affecting the country for more than two months.

In the bulletin reported yesterday, 377 new cases were reported and the same number contained report number 72, to add 1,041 positives to the virus in the last three consecutive days.