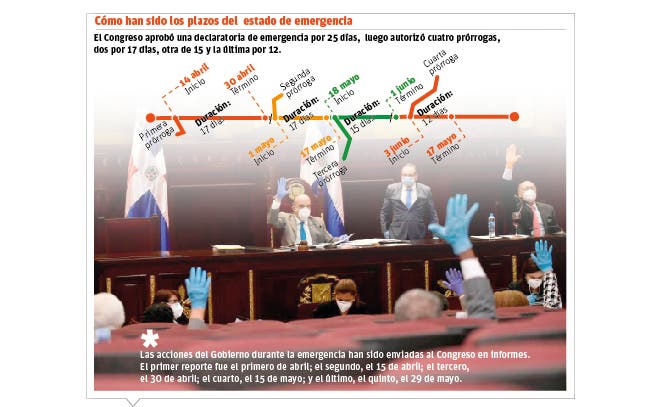 Modification. The Chamber of Deputies modified the Executive’s request for 25 days that was approved by the senators. Term. The fourth extension will start on June 3 and end on 14.

SANTO DOMINGO. -In today’s session in the Senate, no news is expected in the ratification of the request of the Executive Power to extend the state of emergency for 25 days, modified to 12 days by the deputies, after an agreement between the parties represented in that legislative body.

It is recalled that the Executive Branch justifies its request that these deadlines are for the eradication of the virus and on this occasion stated that it is to continue advancing in the gradual and safe de-escalation due to phases of social distancing and the reopening of the economy.”

The senators were summoned for eleven in the morning.

There will be no surprises

In today’s session at eleven in the morning, there will be no surprises because all the requests for an extension by the Government have been approved without any modification. Because the Senate is made up of 26 senators from the ruling party and the Modern Revolutionary has two representatives.

However, opponents in almost all sessions have requested modifications, being rejected by the PLD mechanical majority.

Explaining the reason for a new extension, President Danilo Medina argued that an abrupt uprising would cause further outbreaks, while he considered that the curfew is a crucial measure “with the sole purpose of protecting the health of the Dominican people.”

He explains that the Government works without sparing efforts or resources, so it is necessary to maintain the State of Emergency and continue to apply social and physical distancing measures that have been effective in combating this pandemic.”

It also indicates that according to the experiences of other countries, the total lifting of social distancing measures is not an ideal option.

It is recalled that the Dominican Republic began phase 1 of the de-escalation two weeks ago, with the reopening of companies and stores, as well as state public transport, and the reopening of stores in shopping centers was brought forward for the Day of Las Madres, which was held yesterday Sunday.

Another different scenario
However, with the deputies, the scenario is different, where the opposition plays a fundamental role and has achieved changes, despite the fact that the resolution can be sanctioned with a simple majority.

Last Saturday after several hours of negotiations between the pro-government and opposition deputies, the concession was obtained to approve the extension of the term, but only for 12 days and not 25 as the senators had approved.

The opposition refused to vote in favor of the extension of the State of Emergency, considering that the Government uses the situation to electorally favor itself. The next presidential and congressional elections are scheduled to take place on July 5.

The spokesperson for the Modern Revolutionary Party, Alfredo Pacheco, reiterated that the epidemic and health crisis due to Covid-19 has not been well managed by the central government.
The proposal of the PLD in the voice of the spokesman, Gustavo Sánchez, was received by the opposition deputies, who affirmed that the good of the country is above all.

This is the fourth extension of the state of emergency after it was decreed on March 18 to contain the expansion of Covid-19, which to date has caused the death of 502 people and 4,522 confirmed cases, according to bulletin 70.

Health of the people must exist in the first order
There must always be in the first order to preserve the life of Dominicans. The bad thing is that the PLD is taking the states of emergencies for politicking.

Regarding the State of Emergency, I think that to take measures in favor of controlling the pandemic, it was no longer necessary if we rely on what the General Health Law establishes, because these states of emergencies are associated with acts of purchases outside the norms. Correct and corrupt can act within this framework to steal money from the people.

On the other hand, the economy of the Dominican Republic needs to become more dynamic, since an important segment of it is based on informal trade, a sector that is currently in crisis; micro-businesses are not working and that has caused hundreds of unemployed who are just surviving, in that sense we can, but we restart the productive life of the country fall into an economic crisis in early July of incalculable consequences, we must strengthen the measures of prevention against coronavirus or (Covid-19) and prepare to live with it until it is overcome.

FP responds to the PLD
Themes. Henry Merán, the spokesperson for Fuerza del Pueblo in the Chamber of Deputies and secretary of Legislative Affairs of that political organization, denounced that the Government wanted to be denied the extension of the state of emergency to accuse the opposition of the increase in cases of Covid-19 in the country.

“Throughout the week, officials and communicators related to them started a whole campaign around the issue, some saying that what would happen in the country would be the sole responsibility of the main opposition parties,” said the representative for San Juan.