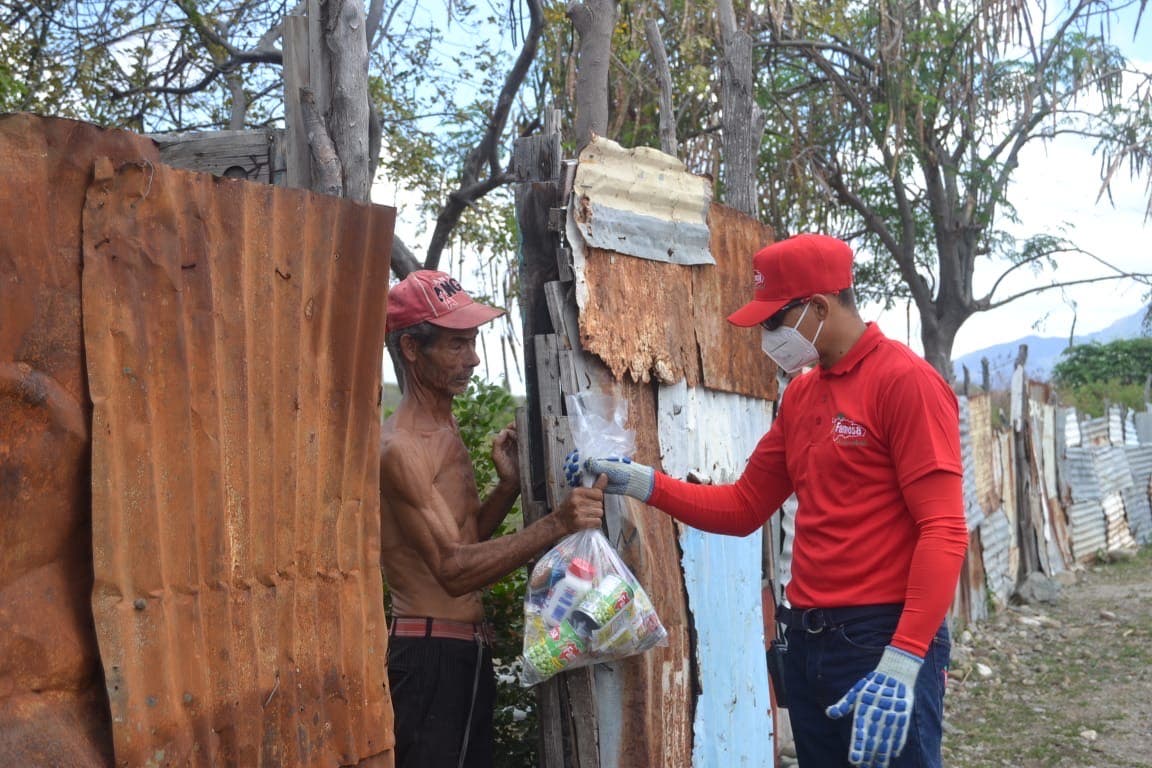 2.- Many families from the humblest municipalities in the Peravia province received the donation from La Famosa.

SANTO DOMINGO.-La Famosa, one of the main food processing companies in the DR, under the slogan that “food can never be lacking on the table of Dominican households,” carried out an intense operation of donations of food rations house by house, throughout the Peravia province.

With this, they seek to reach thousands of families in a vulnerable situation in Peravia, where this entity was founded in 1963.

This enormous work has been carried out for several days with a logistical deployment that addresses sectors and communities that are visited day by day to deliver to each home and first hand a food ration for the sustenance of a week per family, during this quarantine that the Dominican Government has decreed.

The executives of Peravia Industrial, La Famosa, refer that this operation has been carried out with great conscience, demanding the necessary order, physical distance, masks, gloves, tools and protection protocols in the personnel who manage and distribute these rations, achieving a procedure satisfactory safe and risk-free delivery at the door of each home.

In order to carry out this humanitarian work, La Famosa has had the support of community leaders and service entities that identify families and homes at risk in each neighborhood, each community, and each sector.

“This could not have been possible without the support of community civil leaders, recognized figures of social work in Baní and of the Ministry of Public Health and Social Assistance, who voluntarily and with great enthusiasm shake hands with us,” says the team.

In this first stage of donations that are still going on, La Famosa estimates to deliver house by house more than 16 tons of food to more than 20 sectors of the Peravia province.

These rations that each family receives at the door of their home have a wide variety of products, among them; pigeon peas, beans, ketchup, tomato paste, sausages, liquid seasoning, salt, rice, milk powder, instant oats, and vegetable oil, among other products.

La Famosa will continue in this humanitarian work and social assistance to the most vulnerable population in the country in this first stage in which it aspires to reach more families every day.

Among the sectors, neighborhoods, and localities of this Peravia province that have already been visited by the La Famosa donation teams, are in the city of Baní, the neighborhoods; El Maní, La Saona, Barrio El Padre, Nazareth, Corazón de Jesús, Nueva Esperanza and others.

In the different municipal districts are localities like; Los Quemaos de Paya, El Sifón, Barrio Escondido, Villa Güera, Río Arriba. In the mountainous area, we have reached El Jobito, Iguana and Las Barías, among others.

Don Roberto Serrano Oms, who runs this company with members of his family and employees who have worked there for more than 50 years, expresses with satisfaction, “our desire is to guarantee that each family can have adequate food and with these rations complement in a way the cupboard of each home is significantly stocked, in the midst of this pandemic that COVID-19 has left us, throughout the country and the world.”